Survivability: Why Pilots Love to Fly (and Fight) in the F-35 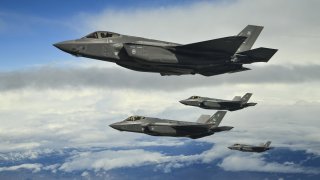 Pilots are much more likely to survive in an F-35 jet than other available fighter aircraft. That’s because survivability is arguably the most significant advantage of the F-35 stealth jet, according to Lockheed Martin’s Chief of Fighter Operation Tony “Brick” Wilson. Wilson is one of three F-35 pilots who recently spoke to the National Interest about the advantages of the fifth-generation aircraft.

“It’s not just survivability when you take this aircraft into harm’s way,” Wilson told the National Interest. “Pilot safety is first and foremost in almost everything that we do from the time that the canopy comes down to the time the jet is back, safe on deck, having completed its mission. Then the pilot is able to hop out safely and go home.”

There are many contributing components to survivability, including stealth, speed, precision weaponry, and long-range sensing. The F-35 jet’s sensing ability and computing can give pilots specifics regarding the extent of a threat, giving them key insight regarding how best to manage an engagement, according to Wilson.

“What I mean by that is when flying my fourth-generation aircraft, it’s a combination of not only managing your own sensors, not only taking in the information a particular data link is providing but also knowing just how intensive an air-to-air engagement or an air-to-surface engagement is,” Wilson said.

The survivability attributes for the F-35 jet also include the existence of an integrated Auto Ground Collision Avoidance System (Auto GCAS), a technology that uses computer automation and advanced algorithms to change course in flight autonomously in the event that a pilot is incapacitated.

“We use systems such as [Auto GCAS] so that when the aircraft is at a precarious attitude that could result in a ground collision, the aircraft gives the pilot the capability to react and when the pilot fails to react, it recovers the aircraft and puts it on a safe trajectory again,” Wilson said. “So that not only can the pilot take it into harm's way, but they can also come home safely every time.”

The Auto GCAS technology calculates where the aircraft is and where it would hit the ground-based upon the way it is flying at the time. If the fighter jet is flying toward a potential collision with the ground, then the onboard computer system will override the flight path and pull the aircraft away from the ground. Interestingly, results from a case study featuring test-pilot input on AGCAS show some of the ways pilots can learn to work with and “trust” the system’s computer automation. This question of how pilots would rely upon the system emerged as a substantial concern because the system takes control away from the pilot, according to the research.

“Understanding pilot trust of Auto-GCAS is critical to its operational performance because pilots have the option to turn the system on or off during operations,” according to a case study called Trust-Based Analysis of an Air Force Collision Avoidance System in Ergonomics in Design: The Quarterly of Human Factors Applications.

The analysis further explains the results of the study, which found that AGCAS was deemed far superior by test pilots to previous “warning systems” which are “prone to false alarms,” can “degrade trust.”

“Warning systems require the user to manually respond and thus are not effective when the pilot is incapacitated or spatially disoriented, and the pilot may not always correctly recognize a warning or correctly make the terrain collision evasion maneuver,” according to the paper.

There are also key tactical advantages to having increased survivability as it can of course present new, previously impossible mission options, according to Lockheed F-35 Test Pilot Chris “Worm” Spinelli.

“The F-35 has a unique capability to go into extremely dynamic situations and environments, higher threat environments, more so than a normal fourth-generation fighter would be able to do,” Spinelli said. “It’s extremely incredible, especially because of its stealth technology and its ability to not be seen by certain threats. I think from a pilot’s perspective that survivability is huge, especially against some of the emerging threats that we have coming online.”