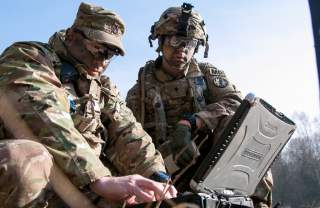 On October 10, Raytheon released its High-Energy Mission Scenarios marketing vid where it lays out its vision for networked laser defenses, but how early Raytheon can deliver—if at all—remains to be seen.

The CGI marketing piece introduces us to its multi-spectral targeting system; a laser system miniaturized enough to be mounted on a small buggy. The video shows the system protecting convoys and bases from unmanned aerial vehicles (UAV) swarms, helicopters, and incoming rockets. It has been receiving some fanfare online, but there are hardware and software challenges which need to be tackled before the system can even come close to what the marketing says it will do.

Raytheon’s system has not yet fully matured to a point where it can deliver on its marketing vision. Earlier, in March, during the Maneuver Fire Integrated Experiment, Raytheon announced the laser had taken down twelve maneuvering class I and class II UAVs. Mortar rounds were also destroyed, but they were stationary targets.

This is still a bit far from what the marketing implies, but what was once science fiction now does not seem entirely out of reach. As a Popular Mechanics article reports, the difficulty lies in effectively tracking and engaging midair incoming artillery with enough precision so that the laser can hit it. Until such a system is developed, the laser weapon will not be as effective. Moreover, due to the acknowledged threat UAV swarms represent, it is safe to assume that engineers are hard at work on it.

Lasers technology has come a long way. In 1995, the National Research Council concluded that “the primary factors that have inhibited the transition of the technology into deployed systems are size and weight.”

Advances in several fields, such as power supplies and energy efficiency, have allowed the system to be miniaturized enough so that today they can fit on a buggy.

The concern over the use of drones by non-state groups has been brewing for little over a decade. In 2004, Hezbollah used drones made in Iran to breach Israeli airspace. This was followed by claims by Hezbollah that it had begun manufacturing drones which could be used for surveillance, firing rockets, or kamikaze-style attacks. Usage of drones by ISIS was first reported and confirmed in 2014. In January 2018, Russia claimed that a drone swarm of thirteen attacked their base in Syria. As relatively cheap commercial drones entered the general market, it is no surprise that they have become a relatively common sight in Syria and Iraq.

State actors such as Iran, Russia, and China, are also taking an active interest in unmanned technology. Russia has reportedly tested its URAN-9 unmanned combat vehicle in Syria as well used UAVs for reconnaissance. Iran has, to some extent, reverse-engineered a downed US stealth UAV as well as developed its own ground systems. China, in particular, seems to hold on to the idea of overwhelming technologically superior defenses through sheer numbers. China has been tinkering with drone swarms for a while now, and it has become the world’s largest producer of commercial UAVs.

The threat of massive swarm attacks, whether by sophisticated systems or simple, low-cost DIY UAVs is a matter of concern for modern armies. For example, while previously the solution to these sorts of attacks would incur a significant cost in ammunition, lasers could take them down for pennies at a time.

Marketing exists to get people excited about a product. In this pursuit, the system’s predicted ability may be inflated to an unrealistic degree. There is no doubt that the system will one day be able to most of the things it sets out to do but perhaps not to the extent of making bases completely unassailable. After all, as the defensive technology and strategy develop, so do offensive ones.