Sweden Doubles Its Financial and Military Commitment to Ukraine 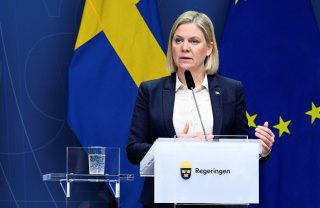 With Sweden’s application to join NATO pending, the country is doubling down on its financial and military aid to Ukraine.

In a press release from the Swedish government, Stockholm explained what its latest budget proposal for Ukraine entails.

“The Government has today decided on an extraordinary amending budget with proposals for Sweden to assist Ukraine with financial support and equipment following Russia's invasion. Among other things, the Government proposes that Sweden donate defense equipment in the form of the robot 17 anti-ship missile, AG 90 automatic rifles and ammunition, and an additional 5,000 86 armored rounds.”

The statement from the Swedish government also explained the rationale behind their decision to send further aid to the embattled eastern European democracy, saying that “the Russian invasion of Ukraine is unprovoked, illegal and indefensible.”

It added that Russia’s invasion of Ukraine “threatens international peace and security and is a violation of international law. In solidarity with Ukraine, and as part of the international response to Russia's actions, the Government sees a continuing need to support Ukraine.”

Russia’s invasion of Ukraine has upended the security calculus in Europe, triggering the most significant geopolitical upheaval on the continent since the collapse of the Soviet Union and the end of the Cold War.

As a result, several countries outside of NATO, Sweden and Finland in particular, have rethought their nonaligned status — and opted to join the alliance. Though Turkey, a NATO member, has said it would block Sweden’s application given Stockholm’s support for Kurdish groups Ankara considers terrorist organizations, the country’s eventual membership appears likely.

The Swedish government previously donated 500 million krona to Ukraine’s central bank  to “support the country’s armed forces.” The Swedes are now likely to donate an additional 578 million krona to Kyiv, which will “strengthen Ukraine's ability to fight Russian aggression at a critical time.”

In addition to the substantial military and financial aid Stockholm has given Ukraine, it has also sent provisions for Ukrainian civilians “through the Swedish Civil Protection Agency, the EU Civil Protection Mechanism and the UN. The Government also proposes that this support be further strengthened by SEK 100 million.”

In total, the financial proposals “will increase the allocated funds to the state budget by SEK 1.0 billion in 2022.”

Prompted by a rash and unprovoked Russian invasion of Ukraine, Sweden is eager to prove it is a defender of democracy and support its NATO application. Kyiv — and NATO allies — will surely take note.