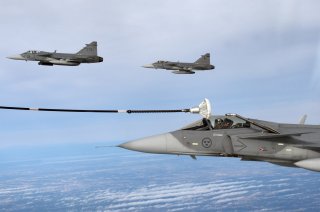 The JAS-39E and F variants of the Swedish Gripen fighter are the black sheep of the family in many ways. Despite being the most advanced variant, they have consistently lost bids to rival fighters, with Brazil and Sweden being the only customers for the JAS-39E and Brazil being the only customer for the JAS-39F. As such, the JAS-39F is shaping up to be a uniquely Brazilian fighter, developed almost in full to the specification of the Força Aérea Brasileira, or Brazilian Air Force. As the Brazilian Air Force is the largest in South America, the capabilities of the JAS-39F are highly relevant, as they could significantly shift the balance of power in the region. Production of the JAS-39F began in late March 2020, though the first aircraft are set to enter service in 2023.

Currently, the Brazilian order is rather small, with twenty-eight JAS-39E and eight JAS-39F variants on order. While this is understandable due to the size of the Brazilian economy, the deal also includes significant manufacturing facilities in Brazil. When the deal was initially signed in 2015, twenty-nine of the thirty-six aircraft were set to be built in Brazil. This since has been scaled down to “complete aircraft assembly of 15 aircraft”, but it is notable that pretty much all JAS-39F research and development, which has been happening concurrently to JAS-39E production takes place in the Gripen Design and Development Network facility in Brazil.

But what separates the JAS-39F from earlier two-seat versions of the Gripen?

Most contemporary light two-seat aircraft are mostly meant for training, with the rear seat having mirrored controls and displays to the front seat so an instructor pilot can sit in the back and take control from a student if necessary. But a lot has been made out of the JAS-39F’s ability to both act in the training mode as well as a “shared workload” mode, where the pilot and rear-seater share the workload of a mission.

This is primarily a boon in ground-attack missions, where kinematic performance is less relevant, but a second crew member can be really helpful in cueing a targeting pod and lasing targets. The Brazilian Air Force is experienced in using twin-seat aircraft for ground attack, having developed the A-29 Super Tucano domestically. It’s likely that some twin-seat task integration know-how from the Super Tucano project has influenced and aided Brazil’s JAS-39F development efforts. Brazil also participated in the joint-development of the AMX International AMX one-seat ground attack aircraft, and their preference for a twin-seat possibly comes from their knowledge of the limitations of a one-seat aircraft in the ground attack role.

Two crew members are also very useful in the electronic warfare (EW) mission, as managing jammer pods and other EW equipment is a full-time task. As jamming is a much-marketed aspect of the Gripen, this seems to be a key role where the JAS-39F could shine in Brazilian service. A Brazilian aviation website states that Brazilian JAS-39s will eventually carry jammer pods in service, to provide the air force with a rough analog to the EA-18G Growler, the variant of the F/A-18 dedicated to electronic warfare.

While this is probably an overstatement, as the EA-18G goes far further than most aircraft in being dedicated to the electronic warfare role, eliminating the gun and adapting some weapon pylons to only be able to carry jammer pods, an EW JAS-39F would be among the most capable EW aircraft in the region.