Swiss F-5E/F Tiger Jets Could Soon Be Flying In The U.S. Air Force 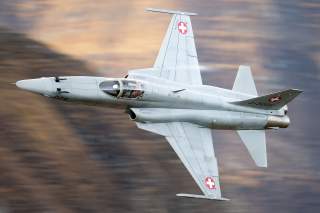 Key point: The Navy and Marines use the F-5s to play the role of enemy planes during realistic war games

U.S. lawmakers are close to finalizing the Pentagon’s budget for 2020. The $738-billion National Defense Authorization Act should allow the U.S. Navy to acquire 22 used F-5E/F Tiger fighters from Switzerland for around $40 million.

The purchase arguably is a serious loss for the Swiss air force.

The F-5s are at least 35 years old and unsophisticated. But they would play an important role in U.S. service. The Navy and Marines use the F-5s to play the role of enemy planes during realistic war games, a mission that’s only growing in importance as America’s rivals expand and improve their own air arms.

One Swiss lawmaker spoke derisively of the old fighters. “If the Americans want to take over the scrap iron, they should do it,” Beat Flach, a lawmaker with the country’s green party, told SonntagsZeitung. “It’s better than having the Tigers rot in a parking lot.”

But the Americans cherish the F-5s. The Navy plans to modify the 12-ton, supersonic Tigers with new avionics, data-links and radar-jammers, bringing them up to the latest F-5N standard.

The tiny jet boasts flight characteristics that are similar to many Russian-made MiGs. Most famously, F-5s stood in for MiGs in the 1986 movie Top Gun. “The F-5 offers an incredibly economic and proven solution for a range of threat presentations,” Tyler Rogoway explained at The War Zone.

The problem for the Marines was that they're replacing around a hundred Harrier ground-attack jets with new F-35 stealth fighters that possess much greater air-to-air capability. In order to use their F-35s to their greatest potential, more Marine pilots must train to fight other planes.

If in coming years the Navy and Marines decide further to expand and extend the adversary force, there are still 26 F-5s in Swiss service, flying alongside 30 much more modern F/A-18s. The Swiss air force plans to replace the last few Tigers with a new type starting in 2025.

The new jets can’t come soon enough for the Swiss air force. By April 2019 the air arm was down to just 10 ready fighters with full-time pilots. The crisis is the result of the Swiss public's decision in a 2014 referendum to reject the air force's proposal to buy 22 new Gripen fighters from Sweden to being replacing the Tigers.

The air force proceeded with its plan progressively to retire the F-5s, however, freeing them up for the Americans to buy them at bargain-basement prices. Now the Swiss air arm must make do with fewer planes ... and keep those planes in service longer. The knock-on maintenance effects drastically have reduced the number of available fighters.