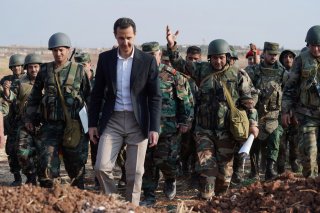 The Syrian uprising erupted in the southern province of Daraa when kids wrote on public walls “your turn has come Doctor Assad.” Since then, Daraa has proven to be one of the icons of the Syrian uprising and calls for freedom, democracy, self-governance, and rule of law in Syria. The Assad government has responded to those calls with live bullets, siege, murder, and destruction. The city and province of Daraa hold a critical geopolitical role in the country. It borders two of the United States’ strategic partners, Jordan and Israel. The main trade pathways through Syria must go through Daraa, from the Arabian Gulf countries all the way to Lebanon, Turkey, and Europe. The Nassib Jaber border crossing port represents the busiest Syrian port of its kind.

I, Dr. Ghbeis, write as an American medical doctor of Syrian descent. I was educated in Syria and the United States, and in the past decade returned to Syria several times to support those Syrians most in medical need. I witnessed first-hand the devastating, inhuman conditions internally displaced Syrians have gone through. I witnessed how whole neighborhoods have been affected by a strategy of siege by the Assad government and its backers, which have targeted the most vulnerable components of society in Syria, the elderly, and children.

Unfortunately, that same strategy of siege has been used by the Syrian government on Daraa al-Balad for the past several weeks. As a result, the humanitarian and medical conditions of 55,000 men, women, and children have become unbearable. The regime is using collective punishment measures and reprisal against large groups of civilian populations in Daraa, both of which are recognized crimes against humanity. Furthermore, in Daraa, all the medical supplies provided to local hospitals and clinics by western NGOs were stolen by Assad’s government-backed militia for financial gain on the black market. What makes the situation even worse is the lack of doctors in Daraa because they, too, were targeted by the Syrian government since the peaceful uprising began a decade ago. Many doctors have fled, but others have not made it out. They and their families were assassinated before they could get out from under the siege.

Since the uprising began, Bashar al-Assad has made every effort to label those opposing it, including doctors, as terrorists. The regime’s false narratives include stating that Daraa’s residents are seeking to build a radical Islamic government in the southern part of Syria. In fact, as time passed, the province has proven to be one of the most resilient against extremist ideologies, despite the terrible hardship. ISIS was unable to hold territory in the area despite the government’s efforts to infiltrate it with ISIS cells, such as the “Yarmouk Martyrs” militia. Free Syrian Army (FSA) brigades in Daraa seized the opportunity to fight extremist groups, including the Yarmouk Martyrs, and for several years, up until 2018, they maintained a tough stand against these groups. In 2018, Daraa province was handed over to Assad under the guise of “reconstitution. At that point, Assad claimed that his regime would take extremist elements and move them to other territories in the Syrian desert and areas near Deir ez-Zor under the watchful eye of the regime and its backers.

Following a 2018 agreement, brokered mainly by Russia and the Trump administration, control of the southern region of Syria was handed back to Assad. Among other things agreed upon in 2018, it is important to highlight the presence of Iranian militias and the requirement to keep them at a distance of no less than fifty miles from the Syrian borders adjacent to Jordan and Israel. This condition, however, was never met. On the other hand, a number of other key provisions in the agreement were met, including regime forces not being allowed to enter Daraa; local FSA fighters handing over heavy weapons and maintaining only small arms, and some of the FSA fighters being rolled into a new brigade under Russian command.

In the meantime, Iranian militias were infiltrating Syrian communities and neighborhoods in different ways across the country. Some of the militias operate under the leadership of Lebanese Hezbollah and other militias under different names, such as Fatemiyoun and Zainabiyoun. These foreign militias move around Syrian society wearing the same military fatigues as members of Assad’s army. Some are organized under the Syrian Army’s 4th Division, which is commanded by Assad’s brother, Maher. This Syrian army division is fully controlled by Iranian interests. The siege in Daraa and the effort to displace the 55,000 Syrian civilians from their homes there in order to tighten control of the southern Syrian region was notably conducted by Assad’s government forces and Iranian militias.

The Iranian initiative in Syria is unacceptable to the people of Daraa. The opposite is true. While the residents of southern Lebanon may have shared sectarian beliefs with Iran, the same is not the case in southern Syria, which is a melting pot of Muslims, Christians, and Druze, and the Shia sect presence is weak in the area.

Prior to 2018, the United States supported Syrian society in southern Syria and backed FSA fighters as well. It was a positive influence on local Syrian communities, in places like Daraa, helping to maintain stability and counter efforts at radicalization as well. However, in 2018, American engagement and influence were lost in that part of Syria to Russia and Iran. The recent escalation in Daraa presents an opportunity for the Biden administration to re-engage communities in this critical region of Syria and impact them in positive ways. Such U.S. engagement will in turn put pressure on Assad and his backers to re-engage diplomatically toward a negotiated settlement on the future of Syria.

The recent events in Daraa make it very clear that the communities in southern Syria are not interested in taking orders from the regime despite the terrible human toll suffered because of it. It would be timely indeed if the United States and its allies fully understood this point and led a diplomatic initiative to end Syria’s decade-long humanitarian crisis by calling the regime to the table and insisting that it compensate the millions of Syrians that have suffered from its policies. Assad will not compromise if he is not made to understand that to do otherwise is far more dangerous for him. Daraa and southern Syria represent an opening to a much-needed political transition in Syria for the sake of all Syrians and the international community. The Syrian uprising was born in Daraa, and it would be poetic justice after all the loss if it is there that the Assad regime goes away for good.

Dr. Muhammad Bakr Ghbeis is the President of C4SSA. Ghbeis was born and raised in the Damascus suburbs and graduated from Damascus University’s School of Medicine before immigrating to the United States in 2004. He now serves as a staff cardiac critical care physician and instructor of Pediatrics at Harvard Medical School and has worked for several American NGOs including the Syrian Expatriates Organization; the Syrian American Medical Society; the Union of Medical Care and Relief Organizations, and Kayla's list PAC.

Mohammed Alzoubi is a board member of C4SSA. He is originally from Daraa, in southern Syria. He is a founder and a board member of an NGO called Promise for Relief and Human Development, which established and managed a university and two colleges in Syria from 2016 to 2018. The program had more than 1200 students and employed more than 175 staff.