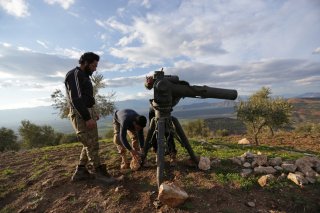 “In my opinion, the major issue with T-90 (and most other modern tanks) is a complete lack of hard-kill Active Protection System [one that shoots missiles down], ideally with 360 degrees coverage, but 270 degrees should be minimum. This not only means that it is vulnerable to being disabled by cheap rocket-propelled grenades in urban combat but also from Anti-Tank Guided Missiles fired from an unexpected angle. When you consider the range of current ATGMs [typically two to five miles], it will be a fairly regular occurrence that you get a side shot opportunity against attacking enemy tank from positions across from the of attacked location.”

Sébastien Roblin holds a Master’s Degree in Conflict Resolution from Georgetown University and served as a university instructor for the Peace Corps in China. He has also worked in education, editing, and refugee resettlement in France and the United States. He currently writes on security and military history for War Is Boring. This piece was originally featured in 2018 and is being republished due to reader's interest.