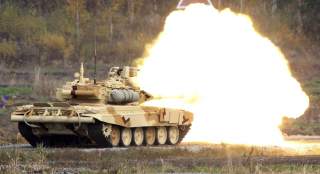 The T-90 and associated variants are one hell of a tank — may be the best in Russian inventories. Relatively modern, they sport many levels of armor and capabilities, are easily upgradeable, and continue to supply armies all over the world.

Vlad Be Nimble, Vlad Be Quick

The T-90 family of tanks are a mix of old and new: the readily available and mass-producible T-72 hull was paired with a more advanced current from the T-80 family — firmly in the Russian design tradition of incremental changes rather than broad, new designs.

It also relies on traditional Russian tank design, standard since the Second World War: squat and low-profile hull and turret, which together offer opponents a smaller target to aim at.

An automatically loading cannon eliminates a loader crew member, bringing the total crew to three, which also aids in keeping the tanks small and compact, compared to the M1 Abrams, or the Leopard family, which are considerably larger and both require a crew of four, with loader.

Tanking on the Cheap

One of the T-90’s greatest strengths is its price. Although newer-model T-90MS is about 4.5 million dollars, the earlier — and cheaper — T-90 designs are still available for purchase and export, and cost considerably less, around 2.5-3.5 million dollars. According to another National Interest contributor, this is an attempt by Russia to “target the higher segments of the heavy armor market.”

For such an affordably priced tank, the T-90 features effective armor. In 2016, a T-90 was filmed in Syria taking a hit from an American-Designed TOW missile. While the TOW missile struck the tank, the T-90s Kontakt-5 armor (explosive reactive) detonated the missile, saving the tank from a knock-out hit. Not bad for an export tank.

Herein lies one of the strengths inherent to Russian arms exports: instead of focusing on selling the latest, greatest, and most technologically advanced equipment, the T-90 family focuses instead on tried-and-true technologies, incrementally improving them onto a compact, affordable platform.

The Rosoboronexport website, the T-90's exporting entity, reflects this when describing the T-90MS, the latest T-90 variant:

“The tank features improved mobility and steerability achieved through the installation a higher-power engine, automatic gear shift control and wheel steering control. While retaining a low silhouette, optimal weight, high mobility and capability to cross the most difficult obstacles at high speed in stride, which are traditional for Russian tanks, the T-90MS has acquired a contemporary level of protection and survivability.”

That strategy has evidently worked: T-90 and associated variants have been exported to Algeria, Azerbaijan, India, Iraq, Libya, Syria, Turkmenistan, Uganda, and Vietnam.

A Russian T-90S tank fires during the "Russia Arms Expo 2013", the 9th international exhibition of arms, military equipment and ammunition in the Urals city of Nizhny Tagil, September 26, 2013. REUTERS/Sergei Karpukhin​.