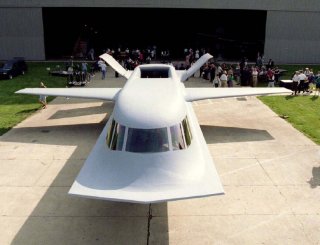 In 1996, the Tacit Blue technology demonstrator was revealed to the public. The airframe was highly unusual. Nicknamed “the whale” or “alien school bus,” Tacit Blue looked like, well a tissue box.

Tacit Blue was a product of initial forays into stealth during the 1970s. During that time, the Defense Advanced Research Projects Agency (DARPA) was on the frontier of stealth technology. Together with the U.S. Air Force, they built a radical technology demonstrator that didn’t really look like it could fly.

Though not entirely understood and still in its infancy, stealth promised to change aerial warfare forever—odd-looking planes that were designed for absorbing or reflecting enemy radar would theoretically be able to cruise battlefield skies undetected, transmitting data about enemy troop movements back to American commanders. Tacit Blue was one of those designs, a virtually invisible aircraft.

It wasn’t a cakewalk though, the Tacit Blue had some intensely difficult engineering problems to deal with related to being stealthy from every angle.

Fighters and bombers with reduced radar cross sections are designed to have very minimal radar profiles from the front and from the back—they would generally fly straight towards a target, then fly away, so the front and rear were optimized as the least visible parts of a plane to enemy radar.

Tacit Blue on the other hand had a much more difficult mission. Loitering on a battlefield would expose not only the front and back of the airframe to enemy radar, but also the sides. Engineers had to create an aircraft that could fly in circles—for hours at a time—and still be invisible to enemy radar from every angle, the so-called “all-aspect” stealth design.

The airframe also had to have an on-board radar to fulfill its reconnaissance mission. This antenna was large and bulky—but had to be integrated somehow into the airplane and still be able to look down onto the enemy. The entire plane was built around the antenna, which was a long rectangle nearly as long as the entire airframe.

The world’s first operational stealth plane, the F-117 bomber, made extensive use of faceted surfaces to deflect radar. Due to Tacit Blue’s boxy shape and multi-angle stealth requirement, this was not possible.

So designers tried something previously never done—defeating radar with curved surfaces. This achievement cannot be overstated. Every stealth aircraft in the United States’ vast arsenal use curves surfaces to defeat enemy radar—the F-22 Raptor, the F-35 Joint Strike Fighter, the B-2 stealth bomber, and the list goes on.

The Tacit Blue’s shovel-shaped nose, boxy look, giant air intake on the top—just like its namesake, a whale—did the trick. According to a U.S. Air Force General, Tacit Blue’s radar cross section (RCS) was “below that of a bat, somewhere down in that area.” Not bad for an initial attempt at curved-surface stealth.

Though Tacit Blue did indeed fly, it was incredibly unstable to fly and required a quadruple-redundant fly-by-wire system to keep it from tumbling out of the sky. It flew from 1982 to 1985. Because it was to be a reconnaissance jet, designers decided to forgo any armaments, and Tacit Blue was not equipped with any weapons.

The Tacit Blue program’s contribution to aviation actually had more to do with advancing stealth technology rather than the original reconnaissance mission profile. Even though Tacit Blue was never entered production, the impact it has had on other stealth programs was enormous. An engineer of the B-2 stealth bomber said that Tacit Blue “was pioneering work. Every day was a discovery.”