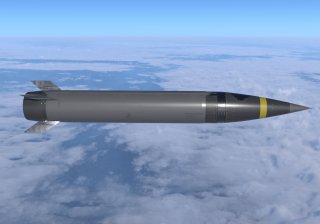 Recently, there has been a resurgence of interest in tactical ballistic missiles (TBMs). Enhanced aerial and space sensing technology has made finding targets for them easier, and despite the proliferation of anti-missile technology, they remain hard to stop. The recent attack on Ayn al-Asad airbase by Iranian ballistic missiles shows just how accurate modern TBMs have become.

While TBMs were almost always assumed to be nuclear armed during the Cold War, arms control agreements and the return to the idea of a conventional battlefield resulted in the development of conventionally-armed TBMs by the late 1970s and early 1980s. The U.S. Army’s premier conventional-only TBM was the MGM-140 Army Tactical Missile System (ATacMS), which entered service in 1991. Designed to be fired from the M270 MLRS (or the later M142 HIMARS), the ATacMS was containerized and interchangeable with a standard rocket artillery load.

The ATacMS proved effective during Operation Desert Storm and the Global War on Terror, but production of it was terminated in 2007 due to a shifting of budget priorities to equipment to fight the counter-insurgency mission. The Army only began seriously looking at a replacement nine years later in the Long Range Precision Fires (LRPF) program, which began in 2016. The LRPF aimed to improve on the ATacMS in two primary metrics: range and ammunition carried. While the ATacMS has a maximum range of around 300km, the LRPF missile was expected to be able to reach out to 499km. LRPF missiles were also meant to be smaller, with two packed in the same space as a single ATacMS.

The two primary contractors that were expected to be competitive in LRPF were Lockheed Martin and Raytheon. Lockheed Martin held a slight advantage as it produced the ATacMS and thus probably had a better idea of how to integrate the new missile into existing Army launchers. By 2017, the two competing missiles were Raytheon’s DeepStrike missile and Lockheed Martin’s Precision Strike Missile (PrSM), which lacks a dedicated marketing name.

However, by 2019, the Lockheed Martin design pulled ahead. While Raytheon held a warhead test in May 2019, Lockheed fired their first test shot of their PrSM in December, while Raytheon’s was delayed. As a result, the Army questioned whether Raytheon’s entry should proceed in March 2020, as it had been hamstrung by persistent technical delays. Only a day after that news was reported in Jane’s, Lockheed made their second test shot, effectively sealing the fate of Raytheon’s entry. The news finally came on March 25, 2020, when Raytheon announced it was exiting the program under mutual agreement with the Army, leaving Lockheed Martin as the last contractor standing to produce the missile.

The Army hopes to field the PrSM by 2023, two years later than initial planned in service date when the program was launched in 2016. But the scrapping of the Intermediate Nuclear Forces treaty has potentially opened an avenue for Raytheon to participate in further versions of the missile. In an interview with Defense News, Brigadier General John Rafferty mentioned that Raytheon’s missile’s propulsion system is “compelling” and different from the Lockheed offering. As the range of tactical ballistic missiles is no longer capped at 500 km per INF, Raytheon’s propulsion system could be incorporated into future versions of the PrSM to grant them increased range and standoff.

Charlie Gao studied political and computer science at Grinnell College and is a frequent commentator on defense and national-security issues. The author credits Defense News for its detailed reporting on the LRPF/PrSM program.