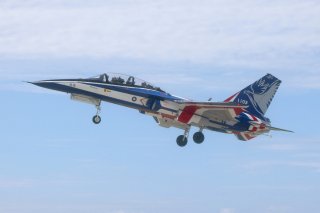 The Taiwanese Defense Ministry announced on Saturday that a group of Chinese aircraft had flown adjacent to its Air Defense Identification Zone (ADIZ), a zone outside the island’s formal airspace in which it requests identification from all entrants and raises its security alert. The incident was the latest apparent test of Taiwanese air defenses.

Taiwan claimed that its radars detected two Chinese naval vessels and nine aircraft on Saturday. A statement issued by the Ministry of Defense on Twitter indicated that the island’s armed forces had “monitored the situation and responded to these activities with aircraft … naval vessels, and land-based missile systems.” It also noted that one of the aircraft, described as an H-6 bomber, had entered the island’s ADIZ in its southwest corner before departing again. In early October, fifty-six Chinese jets breached the same area as part of a similar aerial exercise. While Taiwan has described the repeated exercises as a threatening gesture by Beijing, no Chinese aircraft have actually entered Taiwan’s airspace in recent years.

The relationship between Taiwan and mainland China has always been distrustful and fraught with complications, but cross-strait relations have remained at a historic low since August, when U.S. speaker of the house Nancy Pelosi made an official visit to the island during her tour of Asia. The third-highest-ranking politician in the United States and the highest-ranking official to visit the island since 1997, Pelosi’s visit touched off a firestorm of criticism in Beijing and led the Chinese government to launch a series of naval and air exercises around Taiwan, prompting a similar response from Taipei. Although tensions have since cooled slightly, China has continued to conduct periodic exercises around the island, including repeated entries into its ADIZ, although these incursions began well before Pelosi’s visit.

Although the People’s Republic of China, established in 1949, has never actually governed Taiwan, it has always regarded the island as a rebellious province and vowed to assert Beijing’s control over the island by force if necessary. During China’s 20th Party Congress in late October, Chinese leader Xi Jinping declared that the military would have “enhance[d] training and preparation for war,” suggesting that Beijing could attempt a forceful annexation of the island in the near future.

As a precondition to foreign relations, Beijing requires all other countries to recognize it as the “sole legal government of China,” precluding the possibility of diplomatic relations with both Beijing and Taipei. Although the United States officially maintains relations only with Beijing, it operates the “American Institute in Taiwan,” a de facto embassy in Taipei, and has refused to formally endorse mainland China’s claim to sovereignty over the island.