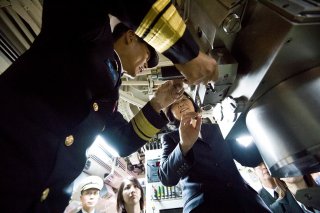 Faced with a growing military threat from China, Taiwan forges ahead with a secretive submarine program.

For decades, Taipei has sought to mitigate the challenge posed by a quantitatively and qualitatively superior People’s Liberation Army Navy by building an indigenous conventional submarine force. A recent Reuters investigation offers new insights into Taiwan’s efforts to launch a submarine program, conveying a stealthy, sophisticated, and ultimately successful effort by Taipei to enlist international technical aid on one of its most ambitious military projects to date.

The Reuters investigation suggests that the United Kingdom has been a key behind-the-scenes player. “Britain also has approved multiple export licenses in the past three years for UK companies to supply submarine components, technology or software to Taiwan, according to information from the Department for International Trade obtained via a Freedom of Information request,” according to Reuters. The news organization crunched government data that shows the value of those technology transfers has “grown exponentially” in recent years. Additionally, Reuters identified retired Commodore Ian McGhie as a “key figure in the drive to recruit submarine expertise.” McGhie reportedly coordinated with a Gibraltar-based company to hire engineers that included former Royal Navy sailors.

Taipei hired “engineers, technicians and former naval officers” from at least five other countries: South Korea, India, Australia, Canada and Spain, according to Reuters. These experts advised the state-backed corporation CSBC Corporation Taiwan, the shipbuilder primarily responsible for Taiwan’s nascent submarine program. Reuters noted that Japanese officials “informally discussed” aiding Taiwan’s submarine program but dropped the idea out of fear of how Beijing might react. Taipei approached the project with heightened discretion in order to mitigate the threat of Chinese retaliation against foreign partners, thus keeping them on board.

Chinese officials sharply condemned Reuters’ findings. In a written statement, a Chinese Foreign Ministry spokesperson urged all the relevant parties to “stop military ties with Taiwan and stop supporting the ‘Taiwan independence’ secessionist forces.” The spokesperson reiterated a phrase often deployed by Chinese officials as a presumed threat against Taiwan and its foreign partners: the countries in question are “playing with fire, and those who play with fire will get burned themselves.”

It was widely reported earlier this year that Washington had greenlit the sale of critical submarine components, including sonars and combat-system hardware, to Taiwan.

Taiwan’s first indigenous submarine is slated to be launched in 2023 and commissioned by 2025. The vessel will be the first in a line of eight submarines that are expected to cost a combined $16 billion.