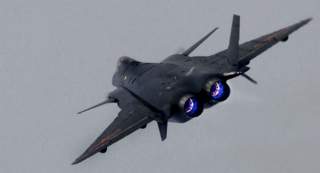 The balance of air superiority over the island of Taiwan is slowly shifting. Once assured by a fleet of sleek, modern Republic of China Air Force fighters, the rise of China—and the decline of Taiwan’s defense budget—has gradually changed the equation in favor of China.

In the short-range battle the J-20 will probably be less maneuverable. The single-engine F-16 will be more maneuverable, and will have the benefit of AIM-9X Sidewinder missiles. But with the advent of high off-boresight missiles, visual range fights are increasingly becoming mutually assured destruction scenarios.

All of this means that the Republic of China Air Force will have a very difficult time dealing with the J-20. The J-20 will be difficult to detect and would probably be able to engage Taiwanese fighters first. One possible tactic the Republic of China Air Force could use is to use the island’s mountainous terrain to hide their low-flying fighters—potentially denying the J-20 the beyond visual range fight. That’s assuming Chinese look-down shoot-down capabilities are not quite as well developed as Western radars. If Taiwanese low-frequency ground-based radars or if its E-2T Hawkeyes’ UHF-band radar could detect the J-20, they might be able vector F-16s into ambushing the larger mainland planes in more advantageous close-range fights where they might have a chance.

The advanced capabilities of the J-20, concentrated in a single package is a real threat to Taiwan. In the face of a large and increasingly powerful Chinese Air Force, Taiwan will find it increasingly difficult to maintain air superiority over the island. It might be worth it to adopt a bastion-style defensive posture—two can play at the anti-access/area denial game.