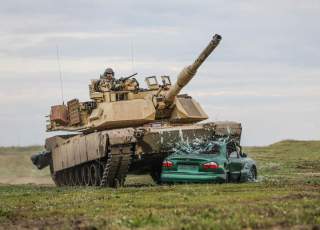 Key point: These tanks will be a major upgrade for Taiwan's defenses and a thorn in Beijing's side.

The U.S. State Department has signed off on the sale to Taiwan of more than 100 M-1A2 Abrams main battle tanks and other weapons.

The $2.2-billion sale, if Congress approves it, could significantly improve Taiwan’s army, which has not acquired new tanks in several decades. U.S. lawmakers historically have approved weapons deals with Taiwan.

“This proposed sale of M-1A2 tanks will contribute to the modernization of the recipient’s main battle tank fleet, enhancing its ability to meet current and future regional threats and to strengthen its homeland defense,” the Defense Security Cooperation Agency stated.

“These tanks will contribute to the recipient’s goal of updating its military capability while further enhancing interoperability with the United States and other partners. The recipient will have no difficulty absorbing this equipment into its armed forces.”

The M-1A2T is a special Taiwanese configuration of the U.S. Army’s latest M-1A2C. The M-1A2T’s improvements include more electrical power, a new auxiliary power unit and an ammunition data link for “smart” shells with reprogrammable fuzes.

The Abrams reportedly will replace, in two battalions, some of the Taiwanese army’s aging M-60A3 and CM11 tanks. The Taiwanese defense ministry has already identified bases for the tanks in the island country’s northern region, according to Taiwan News.

Notably, this latest U.S.-Taiwanese arms deal doesn’t include the 60 new F-16 Block 70 fighters that Taipei wants. The F-16s still are under State Department and Pentagon review.

“This is arguably a more important purchase given the increasing age of the Taiwanese air force's fighter fleets and steady improvements in China's air combat capabilities, but also one where Chinese authorities have historically drawn a ‘red line,’” Joe Trevithick noted at The War Zone.

Washington and Beijing are struggling to negotiate a sweeping trade agreement as each country slaps more and more damaging tariffs on the other.

China has objected to the weapons deal. “We are severely concerned about the U.S.’s move,” Chinese foreign ministry spokesman Geng Shuang told reporters in Beijing in June 2019. “We are firmly against U.S. arms sales to Taiwan. We urge the U.S. to see the high sensitivity and severe harm of arms sales to Taiwan.”

Upgrades to 400 old M-60s and a potential purchase of 100 new M-1s belie Taiwan’s numerical disadvantage when it comes to tanks. China possesses 6,900 tanks, including nearly 4,000 fully modern ones.