Taiwan's Tech Trouble Is Getting Worse 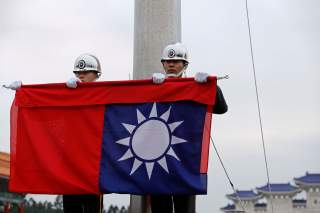 Taiwan is walking an increasingly fine line between its security and economic interests when it comes to major Chinese technology companies—and it’s about to get (even more) political.

Last Friday, the Taiwanese government announced an expanded crackdown on the use of Chinese technology. According to a spokesperson, the Taiwanese government is in the process of drawing up a blacklist of tech companies that pose a risk to national security. The ban will cover specific equipment such as servers, webcams, drones, cloud services, core network hardware, computer software and anti-virus software. Taiwanese government agencies, state-controlled companies and providers of critical infrastructure—including water, energy, telecommunications and financial services—will be prohibited from using equipment from companies on the list, which is expected to be released in a few months.

It is anticipated that major Chinese technology companies, such as Huawei, ZTE, Alibaba, Hikvision and Baidu, will be included in the list. According to Nikkei Asian Review, the government spokesperson said that ‘most’ Chinese (as well as Russian) companies are likely to be banned.

However, Taiwan’s high-tech manufacturing industry remains heavily reliant on Chinese demand—including from many of the very same companies which its government intends to ban.

Just days before the move was announced, March sales figures revealed that orders from Chinese technology companies played a crucial role in lifting Taiwan’s tech manufacturing industry out of a three-year record low in February 2019. The improvement is credited in particular to demand linked to a new flagship phone from Huawei.

‘Huawei’s parts orders on the supply chain grew some 45% from a year ago in the January–March period, according to our checks. Huawei is doing very well in China as the US crackdown drives the patriotism of Chinese consumers, and [the company] also delivers high-quality products’, Jeff Pu, an analyst at GF Securities, told Nikkei Asian Review.

As if this wasn’t complicated enough for one week, news also broke that Terry Gou, outgoing CEO of Foxconn and Taiwan’s richest man, intends to stand in the island nation’s upcoming presidential elections.

Gou—who ascribes his decision to run for the presidency to divine guidance from the sea goddess Mazu—is a controversial character with deep personal and business ties to mainland China. Gou has said he will step down as chair of Foxconn but will remain involved in the company’s major decisions. Foxconn is one of the world’s largest smartphone manufacturers and counts Apple and Huawei among its biggest clients. Gou is Foxconn’s largest shareholder, owning 9.4% of the US$40 billion company. He will be seeking to stand as the presidential candidate for the pro-Chinese Kuomintang party.

Gou’s potential candidacy has raised significant concerns among those who see a likely conflict between his business interests in China and his responsibilities to Taiwanese national interests if elected. Foxconn was expected to hire an additional 50,000 workers off the back of orders from Huawei alone in February.

‘That’s the million dollar question. Who is Gou loyal to? Taiwan? Foxconn? Both? If the answer is Foxconn or both, that puts Taiwan in a bad position with Gou as president because Foxconn’s success is tied to, coercively or not, the Chinese state’, says Lev Nachman, an expert on Taiwanese politics at the University of California.

So, the Taiwanese government intends to blacklist particular Chinese technology companies as threats to national security while simultaneously relying on those same companies to support a crucial part of the Taiwanese economy and at the same time as a powerful and high-profile candidate with ongoing business links to those companies may be running for president.

What this reflects is how seemingly mundane aspects of the technology industry, such as where devices are manufactured or the internal workings of government procurement, are increasingly politically and strategically significant.

ASPI’s International Cyber Policy Centre recently mapped the global activities of 12 of China’s major technology companies. Our findings present a complex picture of Chinese companies as highly innovative and ambitious players on the world stage. It is also abundantly clear, however, that their operations have geopolitical as well as commercial dimensions. Recent allegations of military funding and highly opaque ownership structures further complicate the situation. While the exact nature and degree of political influence over these companies is disputed, it is very clear that they are not purely commercial actors.

Navigating between the dual facets of China’s technology companies as crucial commercial partners on the one hand and potential security risks on the other is a challenge which many countries face, but for Taiwan—long caught at the pointiest of pointy ends of China’s sharp power—the dilemma is particularly acute. Whoever wins in the upcoming elections will be faced with a series of difficult choices. When that time comes, the Taiwanese people will no doubt be hoping that the best interests of Taiwan are the only interests which that person has in mind.

This article by Elise Thomas first appeared in the Australian Strategic Policy Insitute’s The Strategist in 2019.