Take Note China: The Navy Is Arming Its Submarines With Hypersonic Missiles 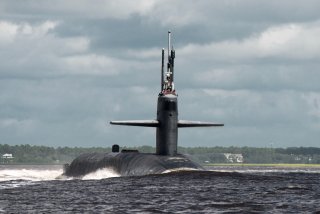 To hold adversaries at risk far into the future, the U.S. Navy is going all-on hypersonic missiles. In the near future, a submarine-launched missile traveling at more than five times the speed of sound will pose an unparalleled threat to adversaries, as the virtually undetectable launch point and speed would make it incredibly challenging to track.

This attack scenario outlines the U.S. Navy’s vision for submarine-launched hypersonic flight, a now-in-development technology expected to be ready by 2028, according to comments to Congressional lawmakers from Chief of Naval Operations Adm. Michael Gilday.

“We will continue to make investments in hypersonic capability and plan to have a hypersonic weapon launched from a submerged submarine by 2028. We are meeting every benchmark in that program and we doubled the Navy’s funding for hypersonics last year,” Gilday told members of the Senate Armed Service Committee.

Hypersonic weapons are essentially “here” for the U.S. military, which can already fire both ground and air-launched hypersonics. As part of this integrated plan, the Navy is preparing to deck-launch hypersonic projectiles from service warships, a development likely to revolutionize surface-to-surface and surface-to-land attack. The Navy is now testing new ship-deck launcher systems capable of firing hypersonic weapons. An ability to successfully launch hypersonic projectiles from Vertical Launch Tubes built into a submarine from beneath the surface, however, remains a ways off.

Tomahawk missiles, for example, can travel as far as 900 miles to a target at 500 mph after being launched from a submarine beneath the ocean. New tactical Tomahawk weapons introduce the ability to architect cruise missiles that can change course in flight to hit moving targets at sea.  A maneuvering hypersonic missile, however, is yet another level of high-speed missile attack, as it does not follow a known trajectory or set path like a ballistic missile, and its high speed makes it nearly impossible for traditional radar to track.

Tactically speaking, an ability to fire hypersonics from beneath the sea could introduce a new kind of surprise attack capability for submarines. While Tomahawk Block IVs operate with a two-way data link; an ability to loiter above targets; and an intelligence, surveillance, and reconnaissance (ISR) capability to send back target information, they are nowhere near as fast as a hypersonic projectile. Tomahawks were engineered to fly parallel to the surface or ground to evade Soviet air defenses years ago, yet speeds of 500 mph are much easier for enemies to track than a hypersonic projectile would be traveling more than five times the speed of sound.

Lurking beneath the surface in coastal waters near hostile territory, hypersonic-missile-armed attack submarines would present enemies with a serious dilemma, as they could hit enemy targets onshore while remaining difficult to detect by enemy ground or air radar systems. A surface ship or lower flying aircraft, by contrast, would likely be discovered by an enemy at great distances, whereas a submarine might succeed in eluding detection and be in a position to launch surprise attacks capable of destroying high-value enemy targets from the ocean within minutes.