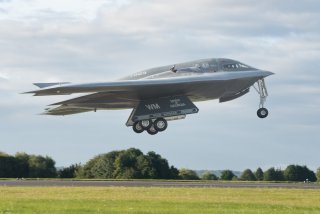 The sleek-looking next-generation B-21 Raider stealth bomber will take to the sky next year after formally “rolling out” in December 2022.

Northrop Grumman and the Air Force have already built as many as six new B-21s as initial steps toward the new stealth bomber’s first flight planned for next year. The B-21 Raider will be unveiled in December 2022 in Palmdale, California, in partnership with the Air Force.

“The focus is on a safe first flight of a production representative aircraft. With six aircraft in various stages of production and test, Northrop Grumman is progressing toward that objective as it continues to reduce risk, refine the building process, and mature the test fleet ahead of first flight,” a Northrop Grumman statement said.

For many years now, the B-21 program has been praised by Air Force leaders as a highly efficient program that has been both on time and on cost while surging stealth technology into a new era of low observability. One key reason for this, both Air Force and Northrop Grumman weapons developers explain, is the successful use of “digital engineering” techniques. Through digital engineering, weapons developers can replicate key weapons performance parameters through computer simulation, making it possible to refine, assess and develop technologies without needing to actually “bend metal” and build platforms. This ability streamlines the developmental process, improves the supply chain and procurement process, and reduces risk in the manufacturing process for new aircraft.

The Air Force’s planned fleet size of B-21 has fluctuated, but mainly in one direction, meaning the service has sought to expand the size and scope of the procurement effort. The service plans to acquire as many as 150 B-21s or more as it pivots toward a new generation of air dominance.

While most of the production and technological details regarding the B-21 are not available for obvious security reasons, there is widespread discussion among senior Air Force leaders about how the new platform incorporates breakthrough, paradigm-changing levels of stealth technology. Given the rapid technological advances in Russian and Chinese air defenses, this is of critical importance. Russian media claims its new S-400 and S-500 Surface-to-Air-Missiles can track and shoot down even “stealth” platforms, an ambitious claim which does not seem to have been verified or corroborated in any substantial way. However, new Russian-built air defenses are networked to one another with much faster computer processing, able to see or detect targets at much greater ranges, and capable of operating on a broader range of frequencies. But, this does not mean that these systems can succeed in “hitting” or engaging a stealth bomber, especially one as advanced as the B-21. A given radar or air defense system may successfully determine that something is “there” or in a general area of operations using low-frequency surveillance radar. However, that does not mean the system can establish a target track on a moving stealth bomber and “destroy” a stealthy platform. Such capabilities require a much greater precision, track loop fire control and image fidelity to accomplish, and it appears there are likely many “undisclosed” stealth properties built into the B-21.

Looking at its external configuration, the fuselage is a rounded, blended wing-body shape with no “visible” exhaust areas. Unlike a B-2 which has a few outlets, the B-21 does not appear to have any. This might suggest that innovators have discovered a new way to dissipate heat from the engine or regulate the thermal signature emitting from behind the aircraft. This innovation is highly significant, as a critical aim of stealth technology is to ensure that the airplane and its surrounding airflow remain as close to the same temperature as the surrounding atmosphere as possible to reduce any detectable heat differential by an enemy’s thermal sensors.