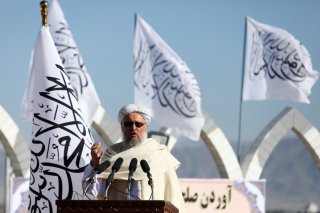 Hibatullah Akhundzada, the shadowy leader of the Taliban, appeared in public in the city of Kandahar, Afghanistan, to commemorate the Islamic holiday of Eid al-Fitr, marking the end of the Islamic holy month of Ramadan.

In his remarks, delivered at the Eidgah Mosque in Kandahar, Akhundzada praised the Taliban’s fighters for their successful conquest of Afghanistan the previous summer, ending the country’s twenty-year insurgency against the United States and the U.S.-backed Afghan government. He argued that Afghans had been the primary beneficiaries of the Taliban’s victory, claiming that they had achieved peace and freedom in the following year.

The Taliban’s “emir” delivered his remarks from within the front row of worshippers at the mosque and did not turn around for his speech. Taliban officials present at the meeting did not allow local journalists to approach him.

Although the character of Akhundzada’s speech was optimistic, his words came only days after an explosion at the Khalifa Aga Gul Jan Mosque in Kabul killed roughly fifty Afghan civilians. The Islamic State Khorasan Province, or ISIS-K, claimed responsibility for the attack.

Since the Taliban’s conquest of Afghanistan in August 2021, ISIS-K has waged a small but ultraviolent insurgency against the country’s new leadership, seeking to undermine Taliban rule through high-profile terrorist attacks that show the new regime’s inability to provide safety.

In previous months, the group’s attacks were largely targeted at the predominantly-Shi’a Hazara ethnic group, who the Sunni members of ISIS-K regard as heretical. However, the Khalifa Aga Gul Jan Mosque was a Sunni mosque. Taliban officials have repeatedly promised to protect both Sunni and Shi’a Afghans, although the group was implicated in similar actions against the Hazara during its twenty-year insurgency.

Little is known about Akhundzada, who is thought to be in his seventies and a veteran of the Taliban dating back to its first period of rule from 1996 until 2001. He is the successor to Mullah Mohammed Omar, who led the group from its founding until his death of natural causes in 2013, and Mullah Akhtar Mansour, who was killed in a U.S. drone strike in May 2016.

Although Akhundzada has sharply limited his public appearances, he has released regular audio recordings during Islamic holidays in which he has praised the Taliban’s efforts and called for international recognition and humanitarian assistance for the new government.