For the Taliban, Building a New Afghanistan Won’t Be Easy 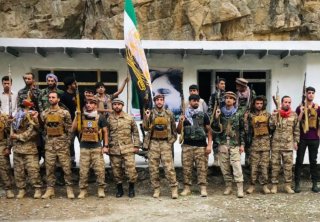 For the Afghans, the international community, and the Taliban itself, the pace at which Afghanistan unraveled totally was unexpected. All the actors and stakeholders in Afghanistan are seized by a paralysis. The international community’s wait-and-see attitude is a testimony to its own incomprehension with the Taliban and what it actually means for the Afghans and the global community. Yet the facts on the ground are shifting already.

After making spectacular vows that they are going to fight the Taliban tooth and nail, the two key Tajik opposition leaders of the Panjshir Resistance, former vice-president Amrullah Saleh (who has since declared himself as the “true” legitimate president of Afghanistan) and Ahmad Massoud, are not so sure of their objectives. Only last week, Massoud proclaimed in The Washington Post, “I write from the Panjshir Valley today, ready to follow in my father’s footsteps, with mujahideen fighters who are prepared to once again take on the Taliban. We have stores of ammunition and arms that we have patiently collected since my father’s time, because we knew this day might come.”

This week, however, the resistance does not seem so sure of its resolve. While in the aftermath of the Taliban takeover Massoud asked for the international community for armed and strategic assistance, this week his stance was much more reconciliatory vis-à-vis the Taliban. As he put it, "We are ready to form an inclusive government with the Taliban through political negotiations. But what is unacceptable is the formation of an Afghan government characterized by extremism, which would pose a serious threat not only to Afghanistan, but also to the region and the whole world."

Meanwhile, Hashmat Ghani, a prominent Afghan businessman who is the grand chieftain of Afghanistan’s nomadic Kochi population and brother of now-deposed President Ashraf Ghani, told Al Jazeera that “it is necessary to accept the Taliban’s takeover of Afghanistan to avoid instability.” To hammer home the message that the Taliban are “reformed natives” whose intentions on good governance and individual liberty should not be questioned, he gave his interview with pictures and paintings hanging in the background and while sitting next to a massive flat-screen television (amenities and objects considered haram and proscribed by the earlier incarnation of the Taliban’s rule book).

Are the Afghans desperately queuing up at Kabul Airport for a one-way ride to the West listening? Are the country’s intelligentsia, businesspeople, civil society members, its students, ethnic and religious minorities convinced of the Taliban’s makeover and its future noble intentions?

Abdul Qahar Balkhi, a soft-spoken, extremely articulate, and young face of the Taliban’s Cultural Commission, is equally honest about their own surprise at finding themselves in the hot seat of governance. In an exclusive interview to Al Jazeera, he confessed, “We [the Taliban] entered Kabul, and it was not planned. But what happened was that the security forces left, abandoned their places, and we were forced to ask our forces to enter and take over security.”

Having inherited a collapsed state, the Taliban is now tasked with forming a government. So far, it is unclear what sort of government the group intends to have for Afghanistan. Its claim to establish an Islamic Emirate of Afghanistan has its pitfalls. If it seeks to institute an inclusive government, as it has been bandying about since it took over Kabul, then its original exclusive vision of an emirate will be deeply compromised. Similarly, should it embrace the theocratic ideal of an emirate, then it would be forced to curtail and bypass democratic norms and practices and sacrifice its “inclusive” political formula.

Contrary to general perception, the current Taliban disposition is extremely concerned about its own vulnerability in the context of governance. The group is not only yet to announce the official formation of a new government but has openly acknowledged that it needs assistance in running the country. Luckily, the Taliban are aware of their limitations in terms of providing a credible government. Being grassroots fighters with strong religious convictions, the Taliban know about a particular kind of internal security and very little else.

While the current Taliban appears savvy on social media and keen to offer a moderate image and good intentions, its leadership profile tells a different story. The Taliban’s upper echelon is occupied by leaders with extremist views and violent pasts. To make matters worse, part of the Taliban’s power is sustained by a known terror group—the Haqqani network. It manages the Taliban’s military assets in their bases along the border with Pakistan. Little wonder then, that there is a disconnect between what the Taliban seeks to project and those who hold key positions in the outfit.

The Taliban are painfully conscious of the fact that they have inherited a dysfunctional economy, a fearful citizenry, a civil society in flight, a near-total absence of foreign reserves, a hostile international system, and ambiguous external supporters and partners. To make matters worse, Afghanistan, under the previous government, was dependent on external aid to cover 75 percent of its budget. The Afghan economy is already in a free fall with a tumbling national currency and a deep financial crisis. Under the circumstances, Afghanistan—and the Taliban—will have to prove itself before the donor community if it expects to see a percentage of that aid inflow in the future.

While the Taliban’s leaders sit in Kabul’s presidential palace and its foot soldiers man checkpoints, it is denied access to the levers of economic power. Call it farsighted or timely thinking, Washington had stopped delivering more dollars to the country just before the government in Kabul fell to the Taliban. Without this critical scaffolding, the afghani is depreciating fast, causing inflation and increasing food prices in the streets. To compound the Taliban’s economic nightmare, under President Joe Biden’s orders, some $9.4 billion in Afghanistan’s central bank reserve, held outside the country, is now frozen. With its impounded international reserves and non-delivery of cash, the country’s financial institutions, banks included, are going to go bust fairly soon.

Given the spectacular lack of goodwill that the Taliban enjoys worldwide, it is unlikely that the international community is going to dish out any money to the new rulers. The only help it is likely to receive is from humanitarian organizations in the form of medicine or food aid. In all likelihood, the doors are going to close in on the Taliban’s Afghanistan once the airlift of the stranded is complete.

The jury is out on what happens to Afghanistan under the Taliban’s leadership. However, restricting its citizens under medieval rules and regulations and punishing non-compliance with horrific violence will not endear the Taliban in Afghanistan’s complex mosaic of ethnic, sectarian, and regional fault lines. It may just be a matter of time before the country’s tribal chiefs, strongmen, and warlords fall back into the routine of unsheathing their knives against the central authorities, as they have done for centuries.

Amalendu Misra is a professor of international politics, Lancaster University, United Kingdom, and author of Afghanistan: The Labyrinth of Violence, (Cambridge: Polity Press, 2004). Follow him on Twitter @MisraAmalendu