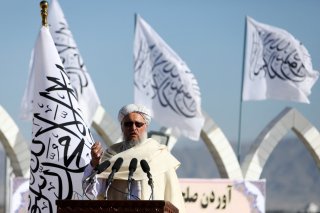 Taliban officials in Afghanistan have decreed that all female television presenters in Afghanistan would be required to cover their faces during broadcasts—a decree consistent with the group’s previous diktat requiring all women to cover their faces in public, regarded as an ominous violation of its early pledge to respect women’s rights in the second iteration of its government.

The Taliban’s new rule was announced by Akif Muhajir, a spokesman for the group’s Ministry for the Propagation of Virtue and Prevention of Vice, who told journalists from Al Jazeera that the country’s authorities had informed local television broadcasters of the new requirements. He added that it is the job of television presenters to present a good example to Afghan women viewing their programs and that the Taliban’s requirement was based on existing Islamic law. In separate comments to Reuters, Muhajir suggested that a medical face mask, widely worn across the world since the onset of the COVID-19 pandemic, could be substituted for a face veil.

TOLOnews, one of Afghanistan’s most prominent media outlets, announced the new restrictions on Twitter on Thursday, adding that the group had described the command as “final” and “not up for discussion.” It suggested that similar rules had been issued to other broadcasters across the country.

Following the Taliban’s conquest of Afghanistan in August 2021, its spokesmen sought to promote an image of moderation and a newfound respect for Afghanistan’s ethnic and religious diversity. Immediately following its capture of Kabul, Taliban officials said that they would continue to allow Afghan women and girls to seek education and employment, claiming that they would not close down the country’s schools as they had during their first period of rule from 1996 until 2001.

Over the next nine months, the group came to walk back many of these early commitments. Many Afghan women working in the country’s public sector were summarily dismissed from their positions. A Taliban ordinance forbade women from traveling more than forty-five miles without the accompaniment of a male guardian, and the country closed down girls’ schools hours after reopening them in late March.

On May 7, the group announced that wearing the hijab would be “required for all respectable Afghan women,” marking the first time that a criminal punishment was codified against those who refused. While most Afghan women prefer to wear the hijab or other, more modest garments, some, particularly in urban areas, do not.