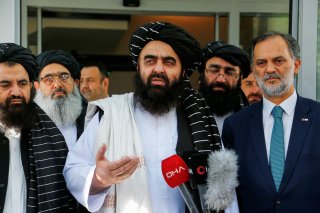 Amir Khan Muttaqi, the foreign minister of the Taliban-led interim government of Afghanistan, indicated that he had spoken with Ahmad Massoud, son of legendary Afghan guerrilla fighter Ahmad Shah Massoud and a leader of Afghanistan’s “National Resistance Front.”

The meeting was held in neighboring Iran, where Muttaqi had earlier met with representatives from the Iranian government. Iran has historically played a major role in Afghan politics, and millions of Afghans have lived in Iran since the start of the country’s series of wars in 1979.

Muttaqi indicated via a video on Twitter that he had guaranteed Massoud’s safety if he decided to return home.

The foreign minister also said that he had met with Ismail Khan, a major warlord in western Afghanistan who had surrendered to the group before leaving for Iran. “We … assured them [Khan and Massoud] that anyone can come to Afghanistan and live without any concerns,” Muttaqi said, adding that the Taliban would not “create insecurity or other problems for anyone.” “Everyone can come home freely and live,” he claimed.

The Panjshir Valley has long maintained a degree of independence from the country’s central government in Kabul. During the Soviet-Afghan War from 1979 to 1989, it saw some of the conflict’s heaviest fighting between Soviet troops and Afghan guerillas under the leadership of the elder Massoud. After the Soviet withdrawal and the rise of the Taliban, the valley was one of the only areas that never fell under Taliban control before the U.S. invasion in 2001.

Although the rest of Afghanistan fell to the Taliban in August 2021, resistance fighters in Panjshir, including the younger Massoud and former Afghan vice president Amrullah Saleh, announced that they would defend the valley. While the Taliban successfully occupied the valley in September, a low-level guerrilla conflict has reportedly continued in its mountains.

Massoud and Saleh fled to neighboring Tajikistan in September. The two men later hired a lobbyist in Washington, DC in an effort to secure recognition or support from the United States.

While the Taliban-led government has promised amnesty to all former opponents, it has been criticized for a series of extrajudicial executions since its takeover in August. Overall, at least 100 people associated with the internationally recognized government of Ashraf Ghani have been killed since August, according to human rights organizations.