This Tank Was Huge (Disaster): Why Couldn't This Russia Beast Stop the Nazi Army? 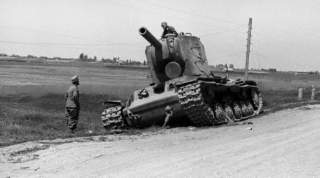 Key Point: The KV tank is a curiosity. In 1941, it was physically tougher than any tank the Germans could throw at it. But it failed to inflict decisive damage during those brutal early months.

A day after the German blitzkrieg into the Soviet Union in June 1941, more than 200 Nazi tanks were powering through Lithuania on a race northward to Leningrad. The Luftwaffe knocked out the Soviets’ nearby air bases, leaving counter-attacking armored columns easy prey for German bombers. Desperate to staunch the bleeding, on June 23 the Red Army sprang its KV-1 and KV-2 tanks — which at the time packed some of the heaviest tank armor in the world — on the advancing Germans near Raseiniai. Soviet tanks were renowned for their ruggedness and reliability— though not their comforts — during World War II. And early in the war, the lumbering Kliment Voroshilov tanks could easily deflect the shells from most of Germany’s field weapons.