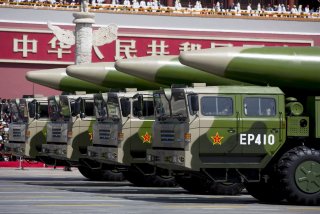 Five Chinese ballistic missiles streamed across the Pacific near Taiwan before landing in Japan’s Exclusive Economic Zone (EEZ) on August 4, leading the Japanese to levy a diplomatic protest against Beijing.

U.S. undersecretary of defense for policy Colin Kahl called it “a sign of kind of how reckless the PRC [People’s Republic of China] reaction was and I think it’s a sign that actions like this are not what mature, responsible powers do,” in a discussion with reporters Aug 8, according to a Pentagon transcript.

The U.S. Department of Defense has been clear that China’s decision to fire missiles near Taiwan, which is only a few hundred miles away from southern, Japan was a provocative and quite dangerous action. In fact, some of the missiles which landed in this area may have flown over Taiwan airspace as part of a threatening and escalatory Chinese live-fire demonstration.

“[W]e know a number of missiles flew into an area where it would look like the track might be passing over Taiwan. … [W]e do know that Chinese missiles landed kind of north and east of the island, and if you look at a map you can kind of see where the flight trajectories would’ve been,” Kahl said.

China is known to operate a large arsenal of medium and long-range ballistic missiles, many of which can reach Taiwan from mainland China. The PRC also operates extremely dangerous DF-26 and DF-21D anti-ship missiles that are able to travel 2,000 and 1,000 miles, respectively, away from the Chinese coast. These weapons can hold aircraft carriers at risk and make it difficult for the United States Navy to project power from the sea near mainland China.

It is not clear how advanced or modern Taiwan’s air defenses may be, or just how much they have been upgraded in recent years. Any attack or effort to take over Taiwan is likely to begin with an opening salvo of ballistic missile attacks, something which Taiwanese defenders would face significant challenges against. Some ground-based defenses, and certainly U.S. Navy ships armed with interceptors, might be in position to blunt or slow down such an attack, however, China has been clearly demonstrating its ability to blanket Taiwan with missiles.

Taiwan does operate U.S.-built Patriot missile interceptors, weapons that might improve the island’s defensive prospects should it face an incoming barrage of Chinese ballistic missiles. A salvo would be tough to fully stop, yet an opening missile attack, while impactful, would not result in China attaining an immediate ability to “occupy” Taiwan. Indeed, China would still need to establish air superiority and succeed with some kind of amphibious landing, leaving ample opportunities for Taiwanese, U.S., and other allied defenders to take the fight to the Chinese People’s Liberation Army.