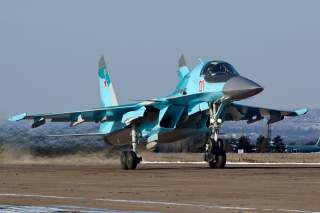 “Soft power,” or the ability to get what you want without the use of force, is typically conceived on such terms as cultural diplomacy, trade, and foreign aid.

In the 21st century, Moscow offers a new twist on a familiar formula: military sports.

Earlier this week, Russian news outlet RT published a promotional video for the second qualifier round of the “Aviadarts” military aviation competition. The brief clip, depicting Su-25 and Su-34 crews firing missiles in a target practice session, is the latest in a constant stream of Aviadarts footage circulated by Russia’s Defense Ministry.

Aviadarts, inaugurated in 2013, has grown into a sprawling logistical operation. Last year, the Defense Ministry boasted that "the competition involves more than 250 pilots of tactical, long-range, military transport and army aviation units of the Aerospace Force and military districts. For the first time at this stage of the competition, about 30 military training ranges are involved for using aircraft weapons."

Aviadarts competitions have varied in content from year to year, though ground-attack routines continue to figure prominently into the program. This year, the second qualifier included a medium-distance bombing run: “During the contest, the crews flew along a 150-km route, reached three turning points at the specified time, and overwhelmed the air defence system. In accordance with the flight task, military pilots launched unguided missiles, dropped bombs and fired 30-mm air cannons at ground targets simulating military equipment and the manpower of a mock enemy,” said the Defense Ministry in a recent press release.

Russian commentators waste no time in highlighting the soft power intent behind Aviadarts: as Air Force Commander Andrei Yudin proclaimed at the 2017 opening ceremony,  "Our pilots have no match. They have the experience of combat operations, combat training, and most important - they are motivated to win.” Even as these games are meant to signal Russia’s aviation might to the rest of the world, they also have domestic value as a potent military recruitment tool.

The competition also doubles as a prolonged advertisement for a large catalog of Russian military aircraft, from staple fighters like the Su-27 to the Il-76 transport plane and the MI line of attack helicopters. There are, to be sure, worse ways to advertise; in a world where aircraft demonstration is limited to the same old, sterile airshow repertoire of aerobatic tricks, military sports facilitates vastly greater freedom of expression for pilots to display their skills and the full technical potential of their aircraft.

Though nominally an international competition, Aviadarts has only had a marginal non-Russian presence. Last year’s competition marked a notable departure from this trend, featuring crews from Kazakhstan, China, and Belarus.

Nonetheless, Aviadarts is only one branch of a much larger Russian soft power project: the International Army Games (IAG), a yearly military sports event encompassing everything from tank biathlons to field kitchen cook-offs. Also known as the “military olympics,” this year’s International Army Games will consist of 31 competitions to be held in Armenia, Azerbaijan, India, Pakistan, China, and Uzbekistan, among others. IAG participants tend to come from a who’s who list of Russian fellow travelers; with the curious exception of Greece, Russia has made little headway in expanding the IAG beyond the former Soviet sphere of influence.

While by no means an ideal vehicle for diplomatic outreach, the IAG has become one of Moscow’s most established tools for the projection of Russian military influence across Eurasia.