The Tariff Threat Against Mexico Could Be Trump's Riskiest Bet Yet 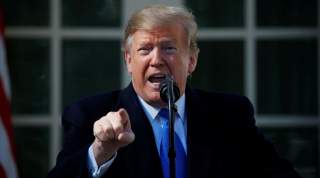 On May 30, U.S. President Donald Trump threatened to impose a 5 percent tariff on all goods from Mexico starting June 10 unless the country takes "substantial" steps to stem the flow of migrants crossing the U.S. border. According to Trump's statement, that tariff would continue to rise by 5 percentage points on the first day of each following month until eventually capping off at 25 percent in October, where it would remain until Washington deems enough has been done to counter northbound migration flows from Central America.

U.S. President Donald Trump has made immigration a clear priority as he gears up for his re-election in 2020. After shutting down the government in December in a bid to fund his U.S.-Mexico border wall, Trump is now threatening an unprecedented tariff hike on Mexican imports in the hopes of getting Mexico City to stem the increasing number of Central American migrants showing up at Washington's southern doorstep. However, combined with the president's ongoing disputes with other key U.S. trade partners, a full-blown trade war with Mexico could be the final straw that pushes the United States into a recession.

Other than fewer migrants flowing through, it remains unclear what other criteria the United States would be use to judge Mexico. Following Trump's announcement, a White House official only noted that the criteria would be "ad hoc." Given this ambiguity, it's possible that Trump could back down from the full threat — using it instead as leverage to reach a modest agreement with Mexico that he could then declare as a victory. On the other hand, the president has also shown that he is willing to tolerate significant collateral damage in order to implement his immigration policy, as evidenced by the 35-day government shutdown earlier this year. Trump made a similar threat in April, in which he gave Mexico one year to halt migration flows before imposing tariffs on its exports.

But now, he's significantly turned up the heat with a new June 10 deadline — a nearly impossible timeline for Mexico to fully implement any kind of plan. There are rumors Trump made the threat in haste after hearing a report about an increase in migrants crossing the U.S.-Mexico border. Thus, it is possible that Trump is willing to make a quick withdrawal from the threat if Mexico can make modest concessions.

Securing the U.S.-Mexico border was a key pillar of Trump's 2016 campaign platform that ultimately ushered him to victory. But over the past two years, migrant crossings into the United States — largely from Central America — have risen to decade-high levels. In April alone, Customs and Border Protection officers arrested nearly 100,000 migrants crossing illegally, most of whom had families requesting asylum.

In addition to threatening Trump's campaign promise of a security crackdown on the southern border, this sudden influx of migrants has also strained the U.S. border security forces' ability to process and hold people awaiting removal or a hearing on asylum. And while the Mexican army and police forces are involved in operations to detain or deter migrant flows, the number of crossing points and corrupt security officers have hindered Mexico's ability to meaningfully stem the movement of people.

Does Trump have the power to impose such tariffs?

The short answer is possibly, though it'd be an unprecedented move and could be challenged by the courts. The International Emergency Economic Powers Act (IEEPA) gives the U.S. President significant power to regulate aspects of global commerce in the event of a national emergency that is either wholly or partially international. And the White House has already declared a national emergency on its border with Mexico in an effort to redistribute the $6.7 billion in government funds towards Trump's wall and border security.

However, the IEEPA does not explicitly authorize the president to implement tariffs as a way to deal with a national emergency. Instead, it affords the power to "regulate" certain commercial activities with the country in question through foreign exchange transactions or the transfer of payments between banking institutions. The IEEPA has also never been used to implement tariffs against another country. In fact, the law was initially passed in 1977 as a way to limit some of the powers Congress previously delegated to the president in times of emergency.

It can certainly be argued that using the IEEPA to implement tariffs is an expansive interpretation of the law. However, the U.S. judicial system does tend to defer to the president on issues of national security. Congress also still has the power to reverse national emergencies and block tariffs, though doing so would require a joint resolution signed into law, something that would demand significant bipartisan backing. And despite Trump's previous trade wars irking many members of his party, Republicans have yet to overturn a single tariff Trump has implemented. The extent to which the federal law can be used to implement tariffs has not been determined by U.S. federal courts, and would thus set an important precedent for U.S. foreign policy.

How will this affect USMCA approval?

Trump's tariff threats certainly risk sticking a pin in the process to approve the United States-Mexico-Canada Agreement (USMCA) on both sides. Mexico had submitted the agreement to its legislature for ratification on May 30. But Trump's threat — announced just hours later — now risks making the USMCA a sideshow. Even if President Trump fully removed the North American Free Trade Agreement to allow Mexico and the United States to instead deal on World Trade Organization terms, the average tariff that Mexican exporters would face would be less than five percent — which is where Trump's threatened move starts. And the full 25 percent tariff would be more than seven times higher.

Such a sizable tax hike would likely force Mexico City to consider delaying a full passing of USMCA until after this particular issue is resolved, just as it did earlier this year when it stalled the process until the United States removed steel and aluminum tariffs on Mexican products. Meanwhile, in Washington, the Senate had been blocking the agreement over the steel and aluminum tariffs as well, and will likely try to do the same should Trump follow through on imposing these new tariffs. That said, it's also possible Trump could use the threat of a trade war with Mexico as leverage against Congress to get USMCA approved.

Countries typically retaliate when a trade partner tacks on higher tariffs, hence the name "trade war." But for Mexico, a full retaliation will be difficult due to its sputtering economy, which has not seen positive Gross Domestic Product (GDP) growth for three of the last four quarters. Trump's announcement, unsurprisingly, has already jarred global markets, with the Mexican peso falling 3 percent. The tariffs risk pushing Mexico into an even deeper recession. And if Mexico responds by upping its own tariffs on U.S. goods, that would only make matters worse — limiting the extent to which Mexico is willing (or able) to match the United States tit-for-tat in a potential trade war.

Instead, Mexico could try a more targeted approach to minimize the blowback on its economy, such as imposing taxes on only agricultural goods. Still, the safest option may indeed be to appease Trump in some capacity and allow him to declare a victory of some sort in exchange for no tariffs at all. And indeed, Mexico appears to already be taking such a route, with President Andres Manuel Lopez Obrador sending an emergency delegation to Washington on May 31.

What would be the economic toll for both countries?

The extent to which President Trump's threats hit the U.S. economy would depend on the level of Mexican retaliation, and whether or not the tariffs end up reaching the 25 percent cap in October. Compared with the other global tariff disputes Trump has waged so far, a trade war between the United States and Mexico would undoubtedly be the most damaging one yet. Roughly two-thirds of U.S. imports from Mexico are through intracompany trade, meaning goods can cross the border several times before becoming a finished product. This highlights the high degree of economic interconnectivity between the two countries.

In the worst-case scenario, both Mexico and the United States could both slap each other with 25 percent tariffs. Should such tariffs last for months, U.S. economic growth in the short-term could be hit by more than 1 percent of GDP and Mexico's could go well beyond 10 percent. But this extreme case is highly unlikely because it would almost certainly be met with backlash in Washington. Even a modest scenario of just 5 percent tariffs with comparable retaliation from Mexico could result in a roughly .25 percent drop in U.S. GDP, and an up to 5 percent drop in Mexico's GDP.

What are the implications for Trump's other trade wars?

Trump is threatening to impose tariffs of up to 25 percent on a total of roughly $1 trillion in U.S. imports from Mexico. When adding up the potential impacts of Trump's threatened tariffs on almost all imports from Mexico and China as well as Japanese and European cars, he risks sending the United States into a recession — thus damaging his re-election hopes in 2020.