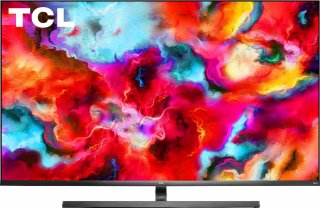 With the 8-Series, TCL has its sights set directly on the higher-end OLED competition.

Especially among current offerings in the 75-inch range, the price points for OLEDs can easily top $3,000, but TCL’s price tag for the same size with QLED is a much more reasonable $2,600. That in itself should perk some ears up for TV shoppers out there.

Keep in mind that the 8-Series utilizes QLED technology, and not OLED. In order to use these quantum dots (often associated with Samsung’s TVs), the TV comes with a layer of nanoscale semiconductors in the screen that produces exceptionally vivid red, blue or green light. TCL also utilizes Mini-LEDs, which do lead to better picture quality. The chief reason stems from the fact that the smaller LEDs can be grouped into more local dimming zones.

The 8-Series definitely can produce those much-revered bright colors and flaunts a wide color gamut, but it’s the vast deepness of the blacks that really draws you in. QLED often has a difficult time competing with OLED displays because OLEDs use organic compounds that include carbon and other ingredients to create the colors. OLEDs don’t require a backlight, so they are able to produce truer blacks.

For the average TV viewer, though, there will not be a huge noticeable difference. The 8-Series, from its elegant design to the highly user-friendly interface, would be a perfect addition to any living room. It boasts that stylish modern look and oozes that high-end feel that you should be getting for the price you’re paying.

If you’re one of the millions who love Roku, you’re definitely in luck. Because of its incredibly intuitive interface, it really is a breeze in quickly finding what you want to watch. Toggling between apps and devices is also a snap, as you don’t have to physically deal with all of the buttons and switches of separate devices.

The streaming offerings in Roku are plentiful, and if a new one hits the market, you can bet that Roku will know that and you’ll quickly have access to it. With frequent updates and feature improvements, it seems that Roku is always looking out for your TV-watching needs.

Moreover, the voice search functionality on the remote control works like a charm, but it won’t be as robust as Amazon Alexa or Google Assistant, which are often found on LG and Sony TVs.

So, with the TCL QLED 8-Series, it seems to be a win-win proposition. You will surely save a few hundred bucks without sacrificing all of the bells and whistles of higher-end TVs. Give one a try and maybe you’ll forget about those other OLEDs.