Technical Architecture Will Build the Future of Warfare 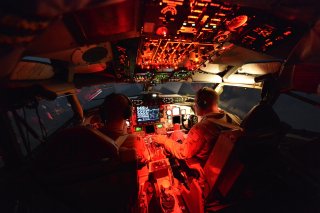 The Army’s “Project Convergence,” the Air Force’s Advanced Battle Management System (ABMS) and the Navy’s Project Overmatch are the names each service gives to an artificial intelligence (AI) and autonomy-enabled network of interwoven “meshed” nodes operating within a broad multi-domain warfare environment.

The defining concept or strategic impetus for each of these respective efforts is clear and fundamental current technological modernization efforts, as it is based upon the premise than any combat platform or “node,” whether it be a fighter jet, tank, ground control station or surface ship, can operate not only as its own combat-capable “entity” but also as a critical surveillance and warfare information “node” able to gather, process, organize and transmit time-sensitive data across a large force in real-time. For example, instead of having to send images through a one-to-one video feed into a ground control center, a forward-operating surveillance drone could find crucial enemy targets, analyze a host of otherwise disconnected yet relevant variables, and send new time-sensitive intelligence information to multiple locations across the force in seconds.

Each of these efforts may have its own name, yet they are fundamentally based upon a common tactical and strategic approach. Merging these respective service efforts into a coordinated, highly-efficient, high-speed multi-service war machine is now being massively emphasized by the Pentagon’s Joint Artificial Intelligence Center.

“We’re also working closely with the Navy on their Project Overmatch,” Lt. Gen. Michael Groen, the director of the Joint Artificial Intelligence Center, told reporters according to a Pentagon transcript.

This is already happening and new efforts are rapidly gaining traction as all the services move toward massively expediting “sensor-to-shooter” time in the context of a multi-service attack “web.” The faster enemy targets can be seen and assessed in relation to the surrounding terrain, incoming enemy fire, navigational specifics and which mode of attack would be most optimal in that circumstance, the faster an attacking force can prevail in combat. This is both as self-evident as it is crucial. Getting inside of or ahead of an enemies’ decisionmaking cycle is, simply put, the essential factor determining victory in modern warfare.

At the same time, this technical architecture is only as effective as the long-range, high-resolution sensors and precision-guided weapons capable of destroying them. Yet such sensors and weapons may be of little use if target information or moments of great relevance are not found and identified in time such that they can be destroyed.

Information-driven sensing and AI-enabled data analysis are then, by design, merged with so-called “kinetic” options such as missiles, rockets, guns, bombs and other weapons to complete the kill chain ahead of an enemy. For the Army, it can begin with unmanned-unmanned teaming wherein forward operating mini-drones transmit sensor specifics to a larger drone which then passes the data through an AI-capable system known as Firestorm which, in a matter of seconds, pairs the threat or target data provided by a “sensor” with the optimal method of attack, or “shooter.” Beginning with a mini-drone or satellite communications network miles away, a process of finding, identifying and destroying an enemy with a ground combat vehicle, helicopter or even dismounted force can be reduced from twenty minutes to twenty seconds.

The idea with the Air Force’s ABMS is similar in scope and application, as it involves gathering, processing and disseminating crucial combat data between satellites, bombers, fighter jets, drones and even ground attack systems. In one Air Force test, referred to as an ABMS “off-ramp,” a ground-based 155-millimeter artillery weapon achieved an unprecedented breakthrough by tracking and destroying a high-speed, maneuvering cruise missile.