Technology Explains Why America's Free Market Is Falling Behind Europe's 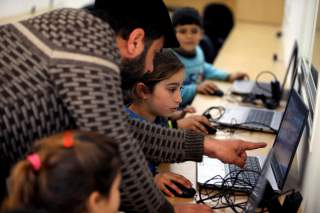 In a new book, Thomas Philippon of New York University makes the contrarian case that the free market is thriving in Europe and faltering in the United States. This may startle observers focused on top-line output figures. Over the past three decades, for example, annual US GDP growth has averaged around 2.6 percent, compared to 1.4 percent for the Eurozone. Since 2010, US growth has averaged 2.2 percent, outpacing Europe’s mere 1.3 percent.

The Great Reversal’s key arguments, however, are more granular. Philippon makes the case that Europe’s more aggressive competition policies have led to better outcomes across a range of industries and for consumers as a whole. Lower prices supposedly make up for slower growth. He covers banking, airlines, and healthcare. But “the question that spurred [him] to write the book” was this: “Why on earth are US cell phone plans so expensive? Or, to broaden it a little further, why do consumers in Europe or Asia pay less for cellular service and, on average, get much more?”

Not an uninteresting set of questions. But are his eureka query and his larger conclusion about internet and digital services — that the “telecommunications industry provides another example of successful competition policy in Europe” — on the mark?

Here is the heart of his case:

Consider home Internet access first. In 2015, the Center for Public Integrity compared internet prices in five medium-sized US cities and five comparable French cities. It found that prices in the US were as much as three and a half times higher than those in France for similar service. The analysis also showed that consumers in France have a choice between far greater number of providers — seven on average — than those in the US, where most residents can get service from no more than two companies.

According to data on broadband penetration among households gathered by the Organization for Economic Cooperation and Development (OECD), the US ranked fourth in 2000 but dropped below fifteenth place in 2017.

In most of at advanced economies, consumers pay around $35 per month for broadband Internet connections. In the US, they pay almost double. How on earth did that happen? How did the US, where the Internet was ‘invented,’ and where access was cheap in the 1990s, become such a laggard, overcharging households for a rather basic service?

We and others addressed many of the international comparison questions in depth during the net neutrality wars, when the daily refrain was that “the US has fallen to” — pick any dismal ranking — “26th in the world in broadband.”

It turned out that most of the comparisons were poorly conceived and executed. The studies mostly failed to adjust for quality, speed, demographics, population density, data usage, and/or proper price indexes. They often cherry picked some nations and left out inconvenient ones — Switzerland comes to mind. Some heavily circulated charts were bogus. The “broadband penetration” metric turned out to be especially erroneous; “penetration” ended up mostly measuring not broadband access but household size. Even the better studies left highly misleading impressions.

After reviewing the conflicting claims and doing our own analysis, we concluded that overall, “The US Leads the World In Broadband.” US speeds were fast, coverage was broad (although never broad enough!), prices were competitive, and Americans generated and consumed (both per capita and per user) more data than anyone (see nearby chart). The US actually generates three times more internet data traffic than Western Europe.

The health of the US software, web, content, cloud, e-commerce, and device markets adds to the robust case that US communications networks are fast and competitively priced. Would America lead the world in so many digital service categories if its digital infrastructure was slow and wildly overpriced?

Direct price comparisons are tricky. And it’s true that in some studies, US mobile prices appear high. In its most recent international report, the Federal Communications Commission found that, according to simple metrics, out of 28 advanced nations, US mobile prices ranked in the teens or twenties. But after making hedonic adjustments for speed and quality, the US ranked 12th and 10th, respectively. We hear that newer studies, with more advanced methodologies, are on the way.

Philippon’s question about whether the US is sufficiently committed to free markets is a good one. But is more European style regulation really the answer?

This article by Bret Swanson first appeared at the American Enterprise Institute.