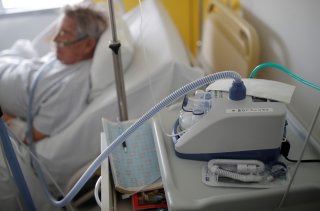 Sen. Ted Cruz has asked Health and Human Services Secretary Alex Azar to expedite production and distribution of medical supplies such as ventilators for those infected by the coronavirus.

“On Wednesday, March 18, 2020, President Trump signed an executive order invoking the Defense Production Act of 1950 (DPA) and delegating authority to you, as the secretary of Health and Human Services, to order the production and distribution of health care supplies needed to protect Americans against COVID-19,” Cruz wrote to Azar in a later dated Friday.

“I urge you to exercise these delegated powers to the fullest extent necessary to ensure that health care facilities across the country have the ventilators they need to treat all patients who become critically ill with this virus,” the Texas Republican wrote, adding: “Time is of the essence.”

The Centers for Disease Control and Prevention reported Friday that the United States had a total of 15,219 confirmed cases of COVID-19, the disease caused by the coronavirus, and 201 deaths.

In his letter, Cruz highlighted the possible upcoming shortage of ventilators:

While it is uncertain how many people will need access to ventilators, The Wall Street Journal reported that ‘[a]s many as 810,000 U.S. coronavirus patients could need [them] by the end of May.’

There are, however, only approximately 62,000 full-featured mechanical ventilators in the United States, and another 98,000 ventilators that could ‘provide basic function in an emergency during crisis standards of care.’

Some companies are announcing plans to produce new ventilators.

Elon Musk, CEO of SpaceX and Tesla, tweeted Friday, “We’re working on ventilators, even though I think they probably won’t be needed.”

GE Healthcare President and CEO Kieran Murphy said in a formal statement that “our dedicated teams are working around the clock to ensure that our customers and partners on the front lines have the equipment and servicing needed to diagnose and treat patients with COVID-19.”

“To help address this global challenge, we have increased our manufacturing capacity and output of equipment – including CTs, ultrasound devices, mobile X-ray systems, patient monitors and ventilators—important in the diagnosis and treatment of COVID-19 patients, while taking steps to ensure safe operations for our employees,” Murphy added.

Doctors in Italy reportedly have had to turn away coronavirus patients due to a lack of ventilators, and Cruz says he doesn’t want to see a similar problem in the United States.

“Without more ventilators (and workers to operate them), hospitals will soon be unable to provide these life-saving machines to a number of their critically ill patients, and doctors will have to make life-or-death decisions about who needs the machines most,” Cruz said.

Trump announced Wednesday that he would invoke the Defense Production Act, which would allow his administration to compel American manufacturing to speed up production of medical supplies in the U.S. that are running low due to the COVID-19 pandemic.

Cruz said Azar should use the act to increase production for medical supplies.

“In this moment you should not hesitate to use the significant powers of the Defense Production Act delegated to you by the president to do what is necessary to ensure that Americans who contract this virus are not denied life-saving care because hospitals lack the appropriate machinery,” Cruz said. “Time is of the essence.”