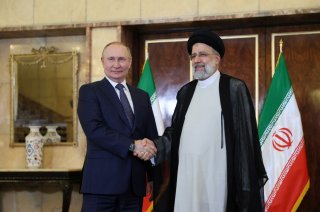 Since the start of its war with Ukraine, Russia has been one of the more isolated countries in the world and the recipient of numerous international sanctions. Now, Russia has teamed up with another country that knows its way around isolation and sanctions.

According to Reuters, Russian gas producer Gazprom has reached a deal with the National Iranian Oil Company (NIOC). The deal was announced as Russian president Vladimir Putin arrived in Tehran to meet with the leaders of Iran and Turkey.

Patrick Sykes of Bloomberg noted something about the report on Twitter. While the Iranian news agency had reported the memorandum of understanding at $40 billion, Gazprom’s own announcement not only did not list a dollar figure but characterized the deal as the sides agreeing to “analyze cooperation options.”

Politico reported about the talks going on in Tehran.

Supreme Leader Ali Khamenei expressed support for an "independent and strong Russia,” while arguing that if Russia hadn’t invaded Ukraine, NATO would have attacked later.

“If the road would have been open to NATO, it will not recognize any limit and boundary,” the Iranian leader told Putin, Politico said. Turkish leader Recep Tayyip Erdogan participated in the meeting, despite Turkey being a member of NATO.

The leaders also discussed the possibility of allowing the export of Ukrainian grain, in order to ease food shortages.

“Not all the issues have been resolved yet, but it’s good that there has been some progress,” Putin said, per the Politico report.

U.S. officials also said this week that Iran may supply Russia with drones, as Russia is running low on those weapons at this stage of its war in Ukraine. Russia, the officials said, had visited Iran to view the drones earlier this summer.

Robert Malley, the U.S. envoy to Iran, said in a CNN interview this week that the Iranian regime is facing a choice between renewing its nuclear deal with the United States and siding with the Russians.

“It can opt for a position of relative dependency on Russia, which itself is isolated internationally…or it can choose to come back into the deal that’s been negotiated…and have normal economic relations with its neighborhood and with Europe and the rest of the world,” Malley said.