Tell the Taliban: Afghanistan Does Not Need an Army 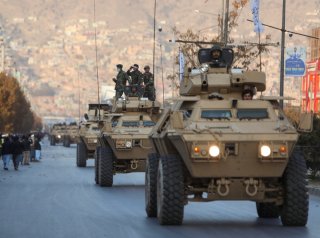 The Taliban have recently announced that work on forming a 100,000-strong Afghan army “nears completion.” While some in Afghanistan might shower praise on the Taliban for this achievement, there is one major problem with the Taliban’s forming, or reorganizing their fighters into, a regular fighting force: Afghanistan does not need an army.

A History of Failed Armies

Historically, Afghanistan never had luck raising, maintaining, and properly utilizing its army, or armies, if you will, even in the best of times. Since 1747, when Ahmad Shah Durrani founded a kingdom in Qandahar which later metamorphosed into present-day Afghanistan, Afghan rulers have made numerous attempts at raising and maintaining armies.

The three armies mentioned above are the ones that lasted the longest. In addition to these three, there were other armies—including the U.S.-funded and now-defunct Afghan National Army (ANA)—as well that Afghans (or their foreign sponsors) raised which also disintegrated swiftly.

The Uselessness of Afghan Armies

Afghanistan is a deeply divided country along ethnic, linguistic, and tribal lines. No Afghan ethnic group or tribe would want to be ruled by another ethnic or tribal group. As such, most soldiers who are recruited for a so-called national army remain more loyal to their ethnic and tribal groups and leaders than to the army command. Hence, a lack of cohesion in Afghan armies, and their repeated disintegration.

Parallel to, or as a result of, the divisions mentioned above, no Afghan ruler has been able to build strong state institutions, project the government’s writ beyond Kabul and a few other cities, and have the confidence of ordinary Afghans. To reciprocate their rulers’ incompetence and indifference, Afghans have always had little regard for those in power in Kabul and their armies. Thus, there has always been a gap between the rulers and the ruled, which has ultimately impacted the performance of Afghan armies.

Over the last two centuries, no Afghan army has been able to deter, or even resist successfully, a foreign invasion. Whenever an invasion has occurred, the Afghan army has either melted away (such as during the Second Anglo-Afghan War in 1879-1881), or it has sided with the invader (a case in point is during the Soviet invasion and occupation of Afghanistan in the 1980s). All invaders of Afghanistan have been forced out of the country by popular resistance, in which Afghan armies played no role, except when soldiers deserted their units and joined the resistance.

If anything, Afghan armies have been a burden on Afghan taxpayers, or their foreign sponsors. For instance, as Thomas Barfield observed in Afghanistan: A Cultural and Political History, before the second Anglo-Afghan War (1879-1881), the Afghan amir Sher Ali Khan used to spend 40 percent of the state’s revenue on the army. However, at the outset of the Second Anglo-Afghan War, Sher Ali fled Kabul and the army subsequently disintegrated. Similarly, in our time, despite America’s pouring billions of dollars into the ANA, no sooner was foreign support withdrawn than the ANA collapsed like a house of cards.

Yet, there is perhaps another reason behind Afghan armies’ historical uselessness. Traditionally, Afghan rulers have raised armies not to defend Afghanistan’s territorial integrity, but as a means to consolidate their power and crush their domestic opponents. For the past century or so, the bulk of the Afghan armies has been deployed in and around Kabul, and far away from the Afghan borders with neighboring countries. The objectives have been to keep dissidents away from Kabul, and to make sure that Kabul is safely secured for the ruling elite.

The Taliban’s primary objective by forming their army is to bring their fighters under a unified command and preserve their unity. The Taliban leadership cannot afford to disarm, or let its fighters loose. Bringing the fighters under a unified army command is also an attempt at keeping an eye on their fighters, and preventing intra-Taliban trouble. Secondly, the Taliban would also want to silence and suppress their opponents across Afghanistan using their army, and the large quantities of weapons and military vehicles left behind by the United States.

There are a few things to keep in mind. First, as insurgents, it was easier for the Taliban leadership to maintain unity while they were fighting a foreign enemy in the name of religion. But now it is hard and too early to say whether the Taliban army will be able to maintain cohesion in their rank and file in the absence of a foreign enemy. Previous Afghan experiences, as mentioned above, are discouraging. The Taliban are also likely to divert critical supplies and cash, which should be delivered to the starving civilian population, to their army. It is one thing to fund a guerilla campaign, and another to finance a conventional army. Afghanistan cannot afford to divert its scarce resources to the task of maintaining a large and mediocre army.

Secondly, no neighboring country, for the foreseeable future, would dare invade Afghanistan. However, if a major power decided to invade Afghanistan, no Afghan army would be able to deter or stop it. Therefore, raising and maintaining an army from the point of view of guarding Afghanistan’s territorial integrity and independence seem useless to begin with. Additionally, Afghanistan’s different ethnic groups are more interested in devolving power from Kabul to the provinces and having a greater say in their regional affairs than in raising an army whose mandate, objectives, and future are uncertain.