Tell Trump: War With Iran Would Be Worse Than You Think—And It Might Not Succeed 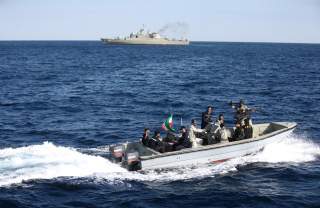 Key Point: If the Islamic Republic didn’t not collapse, the U.S. would eventually have to either admit defeat or open the door to dangerous escalation.

Image: Iranian marine soldiers wave to the camera from a motor boat in the Sea of Oman during the third day of joint Iran, Russia and China naval war games in Chabahar port, at the Sea of Oman, Iran, December 29, 2019. Mohsen Ataei/Fars news agency/WANA (West Asia News Agency) via REUTERS