Thank God: China and India Won't Be Going to War (At Least for Now) 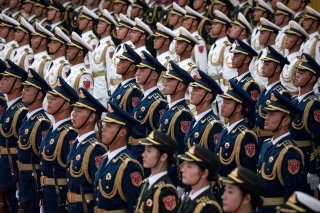 After weeks of intense saber rattling on the Line of Actual Control (LAC) at the poorly demarcated border between India and China, the two nuclear powers are now de-escalating their respective forces. This week it was reported that the Chinese People’s Liberation Army (PLA) has moved back tents, vehicles and troops by 1-2 km from the locations where disengagement was agreed upon at Corps Commander level talks in late June.

A total of three meetings were held by Chinese and Indian Army officials after at least twenty Indian Army soldiers were killed in a face-off with Chinese soldiers in the Ladakh region’s Galwan Valley. China had begun to withdraw troops from the Galwan Valley and Hot Springs last week, but so far it appears that India may continue its more aggressive posturing at the LAC until Chinese further reduces its built up of forces.

The two countries continue to share what is one of the world’s longest unsettled borders and it is divided into western, middle and eastern sectors. The loose demarcation line was formed after the 1962 Sino-Indian War and looks no closer to being resolved any time soon.

Earlier this year, China had deployed armored vehicles to the region and this included its Type 15 lightweight tank, which has thinner armor and a smaller 105mm main cannon, but is more ideally suited to operations in the mountainous conditions near the LAC. At thirty-three-tons it is about half the weight of a typical main battle tank (MBT), but is able to operate in the thinner air and rugged terrain.

Due to the size of the buildup it could be several more weeks before any de-escalation is completed. However, both sides have at least publicly committed to maintaining the peace.

“India’s responsible stance and message at LAC has been globally recognized,” an India official was quoted according to reports from Indian media. “Those invested in the India-China relationship in Beijing are also of the opinion that the present stand-off should be resolved. India has sent out a decisive message that national security is paramount.”

Last week Indian Prime Minister Narendra Modi visited forward locations along the LAC and met with soldiers in the region. He then sent what has been described as a strong message to Beijing in a speech to the Indian soldiers at the frontier.

“This is the era of development,” Prime Minister Modi was quoted to tell his soldiers. “The whole world has made up its mind against expansionism. Our enemies have seen your fire and also your fury.”

Chinese Foreign Ministry spokesman Zhao Lijian responded to the Indian media reports that China has “retreated” from the Galwan Valley and said progress was being made to ease the tensions.

“We hope the Indian side will move towards China and through concrete actions implement the consensus and continue the close communication through military and diplomatic channels to jointly push for the de-escalation on the border region,” Zhao was quoted by the EurAsian Times.

Cooler heads have seemed to prevail but the saber rattling hasn’t ceased, and appears likely to continue in a slightly less aggressive manner—at least for now.