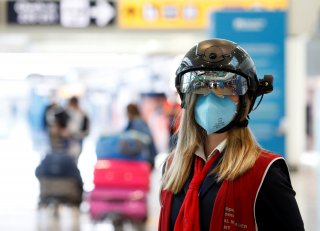 Here's What You Need To Remember: Early maritime quarantine procedures were developed well before bacteria and viruses were understood, and they were by no means perfect.  For example, quarantines were less effective at curbing diseases carried by mosquitos.  Nonetheless, they were an early means by which coastal cities sough to mitigate their vulnerability to diseases transported across maritime vectors.

For days the cruise ship Grand Princess remained moored off San Francisco—her 3,500 passengers forbidden from disembarking onto U.S. soil following the detection of at least 21 cases of COVID-19 (corona virus disease 2019) amongst her crew and passeners. On Sunday, arrangements were finally made to dock the ship in Oakland and have her passengers removed to a quarantine facility in Lackland Air Force base in San Antonio.

Sister ship Diamond Princess suffered even greater misfortune, with (as of March 5, 2020) 706 out of 3,711 passengers and crew testing positive for COVID-19, at least seven of whom have died. Those passengers and crew that had yet to displays signs of infection were forced to remain onboard the vessel moored off Yokohama for weeks due to Japanese quarantine protocols.

Policies designed to combat the spread of disease date back well over a thousand years. In China, the bureaucracy routinely detained sailors and travelers at port to control the spread of disease. And starting in 7th century Damascus, the caliphate began involuntarily confining lepers to hospitals.

Isolating visibly infected individuals could have some effectiveness for containing an outbreak, but could not prevent its spread because diseases often have an incubation period before their symptoms outwardly manifest. Furthermore, some individuals may be carriers of the disease without actually being affected by it, such as the infamous Typhoid Mary.

When Constantinople was ravaged by the first outbreak of the bubonic plague in the year 542, Emperor Justinian—who himself had contracted the plague—not only ordered isolation of infected individuals, but further restricted movements of various minorities such as Jews, Samaritans, pagans and homosexuals upon whom he erroneously heaped most of the blame for transmitting the disease.  Because the movements of these minorities were no more responsible for the spread of the plague than those of other groups, the measure was ineffective.

Today’s systematic quarantine procedures trace back specifically to medieval Italy weary of the second bubonic plague epidemic. The bacteria yersinia pestis was carried by fleas infesting rats which inhabited the holds of Genoese merchant ships making the rounds of Europe. The bubonic plague was not only deadly but horrifying, causing grotesque buboes to swell from the armpits, face and groin and causing fatal comas and outbreaks of delirium.

The plague wiped out between on one-third and three-fifth of the European population, a death rate which seemed nothing short of apocalyptic to enduring those times.  The notary Gabriele de’Mussi wrote:

“Confess, O Genoa, what thou hast done, since we of Genoa and Venice are compelled to make God's chastisement manifest. Alas! our ships enter the port, but of a thousand sailors hardly ten are spared. We reach our homes; our kindred and our neighbours come from all parts to visit us. Woe to us for we cast at them the darts of death! Whilst we spoke to them, whilst they embraced us and kissed us, we scattered the poison from our lips. Going back to their homes, they in turn soon infected their whole families, who in three days succumbed, and were buried in one common grave. Priests and doctors visiting the sick returned from their duties ill, and soon were numbered with the dead.”

Amid this crisis, in March 1348 the city-state of Venice issued a novel policy: ships coming to port from cities known to afflicted by plague would be required to remain moored in the Venetian lagoon for thirty days. The policy was overseen by a three-person board of health.

In time, the thirty-day ban was extended to forty days—either for reasons of efficacy our out of superstition.  However, a forty-day quarantine likely proved more effective, as some studies estimate that the lifecycle of a plague infection tended to last 37 days—with the carrier becoming contagious around day 12, but only displaying external symptoms around day 33!

The Italian word for the forty-day-period, quarantino, is the basis of the word “quarantine” we use today.

If the devastation of 1347-1348 were not enough, new outbreaks of plague recurred across Europe for three more centuries.

The Italo-Croat republic of Ragusa (modern-day Dubrovnik, Croatia) instituted a more sophisticated quarantine procedure in 1377 spelling out that no one from ashore was permitted to visit quarantined ships during the quarantine—and those that violated that rule would themselves be subject to quarantine. However, it was not unknown for wealthy individuals to pay their way out of quarantine.

Other rules that evolved over time include extending quarantine by twenty more days should a member of the crew show signs of infection; and separately quarantining and fumigating cargo carried by ships for an additional twenty days to kill off pests.

In 1468, Venice went on to introduce another innovation—the creation of a quarantine station called a “lazaretto” on a small island on the entry to its harbor where quarantined ships could lay in anchor and sailors could come ashore as they waited out there 40 days.  An older Lazaretto Vecchio had been established to isolate infected persons, but Lazaretto Nuovo pioneered the quarantine station used isolate persons whose infected status had yet to be determined.

Quarantine protocols and lazarettos were adopted across Europe in subsequent centuries and eventually made their way to the New World and Australia.  A quarantine station was built on Bedloe’s Island in New York harbor in 1738—better known today as Liberty Island, site of the Statue of Liberty.  Later, following a yellow fever epidemic in Philadelphia in 1793, the 10-acre Lazaretto Station was built ten miles away on the Delaware River in 1799 (it can still be visited today).

The term “yellow fever” itself is derived from the yellow flag that was flown by a ship warning of infected persons aboard a ship, a practice begun in the 18th-19th century.  Black flags and white flags were also sometimes used.  Today, ships under quarantine fly a Yellow Jack or international signal flag ‘Lima’, with two yellow and two black squares—while a yellow-only flag, or ‘Quebec’ flag, actually designates that a vessel has been cleared by health officials to leave quarantine.

Mass immigration, voluntary or otherwise, in the confines of over-crowded ships presented a new possible vector of diseases. The convict ship Surry departed for Australia carrying 200 convicts in 1814 but arrived with 46 dead passengers and crew due to a typhus outbreak. The survivors were all quarantined for several weeks on the North Shore of Sydney.

Early maritime quarantine procedures were developed well before bacteria and viruses were understood, and they were by no means perfect.  For example, quarantines were less effective at curbing diseases carried by mosquitos.  Nonetheless, they were an early means by which coastal cities sough to mitigate their vulnerability to diseases transported across maritime vectors.

Beginning around the mid-19th century that medieval-style forty-day quarantines gradually evolved into more modern systems thanks to advances in medical science, development of more effective government health institutions, and standardization of protocols by new international institutions.

Despite these considerable advances, which contributed to an incredibly steep decrease in deaths from disease in the 20th century, the increased mobility of populations across air and land transportation corridors in the 21st pose new challenges to quarantine procedures.

As of Sunday, March 8, 2020, most of northern Italy has been placed under a wide-ranging and quarantine unprecedented in modern times as reported COVID-19 cases increased to 5,800 and deaths to 233 at the time of writing. Among the communities affected by the quarantine is Venice, the city which pioneered the practice over 600 years ago.

Sébastien Roblin holds a Master’s Degree in Conflict Resolution from Georgetown University and served as a university instructor for the Peace Corps in China. He has also worked in education, editing, and refugee resettlement in France and the United States. This article first appeared in March 2020 and is being republished due to reader interest.