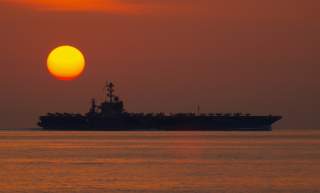 The U.S. fleet likely never will grow to 350 ships. At least not 350 traditional, manned ships. Getting to 12 aircraft carriers alone could take the Navy until the 2060s.

Adm. John Richardson, the chief of naval operations, in a February 2019 conversation with reporters signalled lower expectations regarding fleet size.

The Obama administration actually was first to advocate a bigger fleet. In 2016 outgoing Navy secretary Ray Mabus conducted a force-structure analysis that called for 355 ships, up from the previous goal of 308.

But expanding the Navy under any administration always was an unlikely proposition. It became even more unlikely as Trump and his Republican allies in Congress cut taxes for wealthy Americans, resulting in budget deficits that were unprecedented for a healthy U.S. economy.

Then, in November 2018, Democrats won control of the U.S. House of Representatives, breaking Republicans’ hold on the federal government.

Even before the political landscape shifted, one Congressional shipbuilding expert told The National Interest, on condition of anonymity, that quickly growing the Navy by 75 ships simply by buying new vessels "would be impossible."

The Navy briefly considered recommissioning old, retired frigates and other ships but has not followed through on the idea.

The window for a 350-ship fleet has closed. "Need a hard date for when it closed?" Navy blogger CDR Salamander asked in mid-February 2019. "That's simple; last week's [State of the Union address]. There was no mention of growing our Navy. The [commander in chief] isn't going to invest political capital in it."

As the 350-ship fleet faded as a concept, other ideas emerged. In early 2019 the Navy floated the idea of expanding the fleet without necessarily adding traditional, manned vessels. Robotic ships could help to solve the Navy's growth problem, said Rear Adm. John Neagley, the Navy’s executive for unmanned and small warships.

"Part of the value of having unmanned surface vehicles is you can get capacity at a lower cost," Neagley said. An operational version of the Navy's Sea Hunter experimental robotic anti-submarine ship would cost just $20 million, Breaking Defense reported.

By contrast, the Navy expects to spend around a billion dollars apiece for new, manned frigates.

Robotic ships also are cheaper to operate than manned ships are. Sea Hunter costs around $20,000 per day to maintain, according to the Defense Advanced Research Projects Agency. A manned destroyer costs hundreds of thousands of dollars per day.

"We will not have an appreciably larger Navy," CDR Salamander wrote. "We will be lucky to nudge above 300." Perhaps not coincidentally, 308 was the Obama administration's goal before 2016.

"If we accept that we are not going to have more ships," CDR Salamander added, "what if instead we made efforts to make the ones we have more effective, more capable, more professional?"