There May Be a Way to Destroy "Unstoppable" Hypersonic Missiles 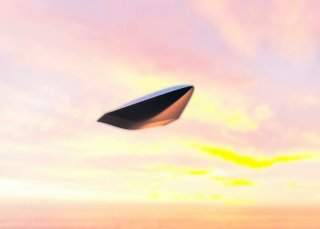 There may actually be a way to destroy "unstoppable hypersonic" missiles. As a matter of fact, there may be several emerging ways to track and destroy hypersonic weapons. But are they realistic, knowing the speed, maneuverability, and potential destruction associated with hypersonics?

Responding to the seriousness of the existing Russian and Chinese hypersonic threat, the U.S. Missile Defense Agency has presented a challenge to the industry to develop a multi-layered defensive concept.

“China continues in pursuit of advanced weapon systems with really novel attributes and capabilities, such as a hypersonic weapons dual-use capability that transcends the formal and normative delineations between domains,” Adm. Charles “Chas” Richard, Commander of U.S. Strategic Command, recently said at the Space and Missile Defense (SMD) Symposium in Huntsville, Alabama.

The aim is to see, find, track, and ultimately destroy a new generation of approaching hypersonic glide vehicles. The challenge is as cutting edge as it is serious. The hope is that an operational hypersonic defense will emerge in the immediate future, given the urgent nature of the threat, and the fact that there is, at least at the moment, no known solution.

“The emergence of numerous more maneuverable threats, such as hypersonic glide vehicles are evading the ability of our ground-based radar networks. They present challenges to our missile defense capabilities, and there's presently no way to counter these threats,” Mike Ciffone, Director of Strategy, Capture & Operations, at OPIR & Geospatial Systems, Northrop Grumman, told reports at the SMD Symposium.

One program showing promise is ongoing Missile Defense Agency work with the defense industry to engineer new satellites and payloads capable of establishing and “sustaining” a target track on seemingly unstoppable or elusive hypersonic attacks. It's called HTBSS, for Hypersonic and Ballistic Tracking Space Sensor program, an emerging satellite program intended to follow maneuvering hypersonic glide vehicles which do not follow the well-known “parabolic” curve trajectory of ballistic missiles.

“As you look at that boost phase, it would normally follow a predictable arc where it burns out at the top of its trajectory. You could forecast forward and estimate that impact point where it's going to land and then provide attribution of the source of that,” Ciffone said.

Maneuvering hypersonic threats, however, follow a different trajectory and their position is not deterministic, he explained.

Ciffone said Northrop Grumman, who makes HBTSS, will be launching an orbit test in 2023 to establish an ability to track hypersonic threats by handing off tracking information to the missile defense infrastructure. The goal in this instance is to get an interceptor or defensive weapon of some kind in position to take out the hypersonic glide vehicle.

“HBTSS is a prototype program on a very rapid progressive schedule. And this is important to ensure our capability is keeping pace with the threat. So our commanders need to be absolutely certain that the data they're getting from these detection and tracking systems is both precise, timely, and correct,” Ciffone said.

There is a lot of highly advanced technical work now informing the maturation of HBTSS, given that legacy or existing radar systems operate with a set “aperture,” or “field of regard,” meaning they are limited within a certain detection purview or envelope. A maneuvering hypersonic glide vehicle, however, will pass so quickly from one field of view to another, that it can become nearly impossible to establish a “continuous” track, something much needed to succeed with an actual intercept.

“You've got to pass through the eyes of the radar to get a track, you need to then do the exclusive algorithmic work to get to discrimination..  then you've got to launch your interceptor and you got to talk to that interceptor and that's all the time we get. We have to integrate missile A into combat system D,” Ciffone said.