There Is Nothing Like the F-35 Stealth Fighter. Nothing. (And Yes, It Costs Money) 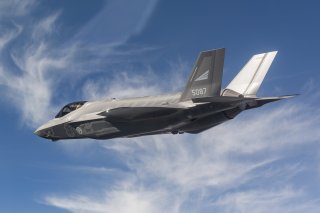 During a Red Flag wargame exercise several years ago, a single F-35 fighter jet was able to find, identify and destroy a small fleet of enemy fighter jets without being detected itself, an event which offered substantial evidence in favor of many F-35 advocates and Air Force leaders who were able to see the operational impact of the jet in a warfare scenario. The wargame represented one of the first key times an F-35 jet fully functioned as intended or envisioned in a massive, great-power warfare scenario involving advanced adversaries and enemy fifth-generation aircraft in a great-power warfare circumstance.

These days, it is not so much the performance-enhancing characteristics of the F-35 jets which come under fire, perhaps for obvious reasons, but the cost questions associated with the jet. A new F-35 jet does cost roughly $90 million dollars per plane, and operational, maintenance and sustainment costs are all projected to be high, yet is it possible that actually following through with the full planned fleet of F-35 jets could save the Pentagon money overall? Possibly.

An interesting Mitchell Institute policy paper, titled Resolving America’s Defense Strategy-Resource Mismatch, makes the case for an alternative cost metric or method of analysis through which to address some of the pressing questions about cost issues associated with the F-35 jet. The paper seeks to make the case for a “cost-per-effect” analysis model for discerning aircraft costs. “Cost-per-effect is an assessment measure that affords the ability to assess the “business cases” behind comparative technologies through the operational lens of enterprise mission effectiveness and fiscal efficiency, not just lowest up-front per-unit cost for a piece of equipment that may only address one facet of the kill chain,” according to the paper.

In terms of a numerical breakdown, the Mitchell Institute policy paper says the hourly operational costs of an F-35 jet are in the range of $35,000, whereas a report from Defense News last years say F-15EX operating costs are roughly $29,000 per hour, and a Jane’s Defense Weekly estimate puts F-18 hourly costs at $24,000. It appears the hourly operational costs for the F-35 jet are slightly higher than its fourth-generation counterparts, however, what happens when an overall cost-assessment metric is analyzed with a mind to performance, operational use and mission effectiveness?

The study performed an analysis of the opening airstrikes of Desert Storm many years ago, with a specific mind to what assets and resources were necessary to achieve the mission objective, using the “cost-per-effect” assessment model. The findings indicated that forty-one aircraft were necessary to provide sweep-escort missions, suppression of enemy air defenses and then actual bombing attacks. Using stealth platforms, however, the analysis found that only twenty aircraft were needed. Stealth aircraft could in effect accomplish all of the same objectives in a much more streamlined, yet high-performance mission accomplishment-oriented fashion, therefore actually reducing the overall operational costs of the mission. Perhaps of even greater significance, the use of stealth vastly improves survivability, meaning the pilots performing the attack missions have a much greater chance to survive.