There Was Strong Competition Among U.S. Airlines Before the Coronavirus Pandemic 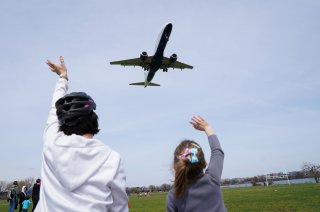 Government restrictions on air travel and passenger fears about catching COVID-19 have led to a historic collapse in the demand for air travel. The International Air Transport Association estimates that the pandemic could lead to industry-wide losses in excess of $110 billion, leading the industry to request a $50 billion assistance package from the US government.

In exchange for government assistance, policymakers are contemplating changes to the ways that airlines do business. Senator Edward Markey, for example, argued he would require “major strings attached … before supporting any airline bailout,” including restrictions on ancillary fees, stricter emissions targets, protection for small and regional airlines, and new labor protections. In an op-ed in Monday’s The New York Times, Columbia Law Professor Tim Wu agreed, adding requirements for larger seats and restrictions on common ownership to the list of grievances against the airline industry.

Wu argues that these regulations are necessary to offset some of the negative impact to consumers from the airline merger wave during the early 2000s. He and others point to airlines as the poster-child for how large-scale mergers combined with high barriers to entry reduce consumer choice, leading to high prices and lower quality service.

But the collective hand-wringing over airline mergers demonstrates exactly why aggregate measures of industry concentration are a misleading proxy for consumer welfare and, as a result, why new government regulations on airlines are unlikely to make consumers better off.

From 2002 to 2019, the number of major commercial airlines operating domestic flights declined from 26 to 12. The Hirschman-Herfindahl Index (HHI), a barometer for industrial concentration used in the evaluation of mergers by the Department of Justice and Federal Trade Commission, increased 41 percent over the same time period. This is often cited as evidence of the anti-competitive impact of airline consolidation.

But flying has never been more affordable. The graph below plots inflation-adjusted prices on the left axis and the HHI on the right axis from 2002 to 2019. The long-term trends in the two lines move in opposite directions: prices are going down as industrial concentration is going up. Inflation-adjusted prices for airline tickets today are 20 percent lower than a decade ago. Even after taking into account all of the new ways that airlines collect ancillary revenue from passengers, domestic air travel is a bargain by historical standards.

There are two reasons why the cost of air travel has not gone up in a market that no longer counts America West, Northwest, Continental, Airtran, US Airways, and Virgin America as competitors. The first is that flight prices depend on the competitive intensity of specific routes, not on the number of airlines competing nationally. If two airlines with distinct route portfolios merge, the number of airlines flying between any two cities should not change by very much and neither should prices. A better measure of concentration is the market-level HHI — the passenger-weighted average of the HHI calculated for each pair of cities that airlines fly between.

Second, the data show that competition among the airlines operating on a typical route is intensifying. Some routes in which one airline used to dominate now have a number of competitors with more equal market shares. Take, for example, the route from New York City to Dallas-Fort Worth. In 2008 there were 10 airlines flying between the two cities, but American Airlines carried 68 percent of the passengers. By 2018 there were only six airlines, but the route has become more competitive; American’s market share is down to 48 percent, and Southwest, Delta, and United each have market shares of over 10 percent. In this and many other markets, we see the competitive effects of a reduced number of airlines flying particular routes being offset by more equal market shares among the remaining competitors.

To get a fuller picture of how competition in the airline industry has evolved, we estimate the market-level HHI for domestic US air travel and then decompose the index into two components: The first captures the inequality of market shares among competitors (“the inequality effect”). The second depends on the number of competitors in the market (“the N effect”).

The figure below shows trends in market-level HHI (blue line) and the extent to which the changes are due to market-share inequality (green line) or the number of competitors (red line). Despite all of the mergers, market-level HHI has actually decreased by eight percent since 2002. This decline in market-level concentration has been driven by a 17 percent decrease in the inequality effect that has more-than-offset the 13 percent increase in the N effect.

Whether or not to spend taxpayer money to support the airline industry is a difficult economic and political question. But, whether policymakers should seek major changes to the structure of airline competition in exchange for a bailout is an easy one. Over the past 15 years, airlines have become more apt to compete head-to-head over routes, making air travel more affordable even as the number of airlines has decreased. The data make a compelling case that competition among airlines was stronger than ever before the COVID-19 pandemic.

This article by Scott Ganz first appeared at the American Enterprise Institute.