These 5 Empires Once Controlled Of India 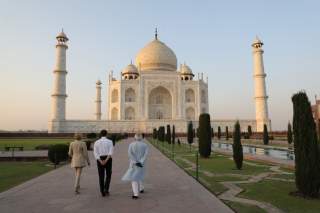 South Asia is like a world unto itself. Also known as the Indian subcontinent, its particular geography and climate have always led to it having distinct sets of histories and cultures. Currently, over a fifth of the world’s population lives on a landmass almost the size of Europe excluding Russia—it contains deserts, polar-like conditions, rainforests, plains, hills, and temperate forests. In short, South Asia is a microcosm of the world.

Therefore, it should come as no surprise that its history is complex, with empires, states, and independent cities often coexisting together in the region. South Asia’s historical political configuration bears more resemblance to Europe’s than China’s: a recurring theme in South Asian history has been the difficulty of creating and maintaining empires that span the entire subcontinent, with smaller, regional states being the norm. As in traditional Hinduism's idea of reincarnation, empires are born to die, only to give rise to new empires, which then fall, in a never-ending cycle.

With that in mind, here are South Asia’s five greatest empires. Since the Mughal and British Empires are well known to western audiences, I have decided to omit them and focus on the pre-European, pre-Islamic empires of South Asia.

The Maurya Empire (320-185 B.C.E.) was the first major historical Indian empire, and definitely the largest one created by an Indian dynasty. The empire arose as a consequence of state consolidation in northern India, which led to one state, Magadha, in today’s Bihar, dominating the Ganges plain. In the wake of Alexander the Great’s invasion of northwest India, one Chandragupta Maurya took over Magadha and created the Maurya Empire.

The empire was initially very successful both internally and in terms of foreign policy. Many of its policies were set out by Chanakya, Chandragupta’s minister, who wrote a book advocating a strong, centralized, authoritarian state, The Arthashastra. After a treaty with Alexander’s generals, the empire acquired territory in Afghanistan and Iran. By the time of Chandragupta’s grandson’s reign, the empire included most of South Asia except the southernmost parts of it. This grandson, Ashoka, is famous for having embraced Buddhism due to remorse after his bloody conquest of Kalinga (today’s Orissa) around 260 B.C.E. This elevated the nascent religion.

The Maurya Empire collapsed not too long after Ashoka's death in 232 B.C.E.  Some historians have argued that the elevation of Buddhism was responsible for this as it is not as compatible with running a state as Hinduism. However, the empire’s fragmentation reveals the problems of actually maintaining an empire in a region as diverse as South Asia. Despite Chanakya’s book, the empire depended less on institutions than on able rulers, the lack of which doomed it and led to increasing local rule.

The Kushan Empire (135 B.C.E.-375 C.E.) was founded in the Bactria region of northern Afghanistan by Yuezhi nomads who migrated there from Xinjiang due to Han Dynasty campaigns. Once there, they displaced the Greco-Bactrian kingdom and expanded over the Hindu Kush mountains into today’s India and Pakistan. At the height of their empire, they controlled most of the Ganges valley and an arc that extended through Afghanistan and Central Asia into Xinjiang. It was under their reign that trade routes developed between India, China, Persia, and Rome.

Under the influence of the Kushans, who eventually moved their capitals to Peshawar (in Pakistan) and Mathura (in India), Indian influence, especially Buddhism, became predominant across Central Asia. This tendency reached its height under the Emperor Kanishka (127-151 C.E.) who convened the 4th Buddhist Council—essentially converting Buddhism into a state religion; Kanishka also expanded his empire deep into central India.

Ultimately, however, the empire fragmented into many principalities and was replaced in North India by the resurgent Hindu Gupta Empire while its Afghan territories became tributary to the Persian Sassanid Empire.

The Gupta Empire (320-550 C.E.) was a great empire but also had a mixed record. Like the previous Maurya Empire, it was based in the Magadha region and conquered much of South Asia, though unlike that empire, its territory was limited only to what is today North India. It was under Gupta rule that India enjoyed the height of its classical civilization, its golden age, when much of its famous literature and science was produced. Yet, it was also under the Guptas that caste became rigid while the decentralization of power to local rulers continued.

After a period of initial expansion, the empire stabilized and did a good job of keeping out invaders (like the Huns) for two centuries. Indian civilization expanded into much of Bengal during this time, which was previously a lightly inhabited swampy area. The main achievements of the Guptas during this era of peace were artistic and intellectual. During this period, zero was first used and chess invented, and many other astronomical and mathematical theories were first elucidated.

The Gupta Empire collapsed due to continuous invasion and fragmentation from local rulers. Power at this point increasingly shifted to regional rulers outside of the Ganges valley.

The Pratihara Empire (650-1036 C.E.), also known as the Gurjara-Pratiharas is little known in the West and hardly better known in India. Yet it is one of the most consequential states in South Asian history and its size and duration exceeded many other empires listed here. The empire originated among military clans in western India after the fragmentation of the Gupta Empire. This period saw the rise of the Rajputs in the deserts of parts of Gujarat and Rajasthan, who were to play an important role in subsequent Indian history. The Rajputs were Kshatriyas (a caste of warriors and rulers) who dedicated themselves to warfare, martial prowess, and fortification with a zeal previously not found in India; in this sense, they resembled the feudal knights emerging in Europe around the same time. Rajputs were fiercely independent and always held their fiefs autonomously while also allying themselves to the Mughals and British at various times.

Shortly after the rise of the Pratiharas, they defeated Arab invaders at the Battle of Rajasthan (738 C.E.), halting Muslim expansion into India for three hundred years. Later on, they set up a capital at Kannauj, near Delhi, and expanded into central India. In both western and central India, they set up a large number of fortifications, making these regions hard to conquer. More importantly, a more muscular form of Hinduism emerged in this period that provided the ideological basis for later resistance to Islam in a way that was not possible with Buddhism.

Like most Indian empires, the Pratihara Empire eventually fragmented into multiple states and Mahmud of Ghazni, an invader from Afghanistan, who took away a lot of gold and demolished temples, sacked Kannauj in the early 11th century. The Pratiharas soon petered out.

While most of India’s empires have been primarily land-based powers, the Chola Empire is unique in that it was a naval empire. The historian John Keay noted “the idea that the sea could be political, a strategic commodity in its own right dominated by a state rather than by commercial competition, was a relatively new concept for Indians.” The Cholas were based in Tamil Nadu and had been around as a minor state from the second century B.C.E. However, their imperial period began in the 10th century C.E, when they dominated all of South India.

Due to geographic and topographic reasons, the projection of military power out of South Asia has always been difficult, leading to relatively little conquest of territories outside this region by South Asian states. However, South Asia’s position on the sea is an exception to this rule, and a great naval power can use the region as a base to dominate the Indian Ocean. The Cholas knew this, as did the British later. The Cholas were famous for their maritime expeditions that gave them control over the Maldives, Sri Lanka, and the Malaysian-Indonesian archipelago by 1025 C.E. Large portions of northern India and Southeast Asia’s coasts were tributary. After a period of decline, the Chola were overthrow by a vassal in 1279 C.E.

After the defeat of a Hindu coalition by Muhammad of Ghor in 1192 C.E., Islamic rule began over much of northern India. At least two Muslim empires worth the name of great powers existed during this period: the Delhi Sultanate (1206-1526) and the Mughal Empire (1526-1858). Other prominent empires during this era include Vijayanagara in South India (1336-1646) and the Maratha Empire throughout most of South Asia (1674-1818). After 1757, the British Raj eventually came to dominate South Asia afterwards by defeating local rulers, the Mughals, Marathas, and Sikhs and ruled until 1947.

This first appeared years ago and is being reposted due to reader interest.