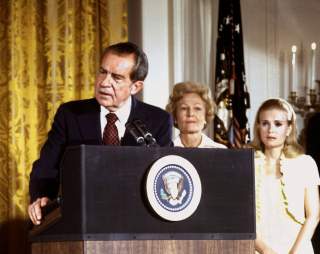 One of the tiresome aspects of today’s politics is the widespread tendency on both sides to rush to conclusions on difficult questions. Too often both Democrats and Republicans trumpet an answer before they have given much attention to the facts behind the topic in question.

Now on some issues, preordained positions make sense — our parties do have identifiable differences in philosophy which lead to different conclusions. Democrats are more likely to support higher taxes and bigger government, for example, and Republicans the reverse.

But on questions of presidential misconduct, in order to know the right answer, you have to apply yourself to mastering all of the facts to determine whether the president’s actions constituted an impeachable offense. Based on what I have seen so far, I do not know if President Trump's behavior has amounted to impeachable conduct, but there is a right way to go about making that determination.

Thankfully, we have a guide on how to do just that. In 1974, under the leadership of Peter Rodino, a back-bench Democrat from New Jersey, the House Judiciary Committee took the time to review all of the facts concerning the allegations of misconduct by President Richard Nixon and, after a six-month inquiry, concluded on a bipartisan basis that the president should be impeached and removed from office. In the process, the members earned the support of the vast majority of the American people and helped persuade the president that he should resign rather than face certain impeachment and removal.

I had a front row seat to this process as my father John Doar led the impeachment inquiry staff as Special Counsel. Dad was appointed by the Democrats partly because he was a Republican, but mostly because he had earned the trust of both liberals and conservatives during his time working in the Justice Department under Presidents Eisenhower, Kennedy and Johnson. That respect was reflected soon after his appointment in December 1973 when Melvin Laird, a member of President Nixon’s cabinet (and great friend of AEI), told newspaper reporters that the committee had made a good choice, selecting a counsel who would not find an impeachable offense if it didn’t exist.

Peter Rodino, D-NJ, of the US House of Representatives Judiciary Committee, answers questions during a news conference in Washington, DC, Wednesday, March 13, 1974. The committee and their counsel met to consider a response to the White House refusal to turn over all tapes and document the panel wants to use in the investigation to impeach President Nixon. From left are, Albert Jenner, minority counsel, Rep. Edward Hutchinson, R-Mich., Rep. Rodino, and John Doar, chief counsel. AP Photo Archive

During the course of the inquiry, the committee made five key decisions which led to the bipartisan outcome — and which should be a model for any impeachment inquiry today:

1. The inquiry was conducted by a unified staff.

When Rodino announced the appointment of the special counsel, at a press conference where he was joined by the committee’s senior Republican, he said, “Mr. Doar is not to be considered the counsel of the majority or of the minority. He is counsel for the entire Committee.” Lawyers chosen to serve on the committee staff were selected without consideration of their political affiliation and worked as one unified team, leading one committee member to say after a visit to the staff office, “You can’t tell the Democrats from the Republicans.” When the Republicans selected the prominent, Republican lawyer Albert Jenner to serve on the staff, he chose to take his direction from the Special Counsel. This led liberal Democrats on the committee, who were often frustrated with Rodino’s deliberate pace, to grouse about the committee’s “two Republican counsels.”

2. The inquiry was authorized by a vote of the full House of Representatives.

To ensure that the committee had the necessary authority to undertake the impeachment inquiry and to strengthen its right to subpoena material from the White House, Rodino asked the House for explicit confirmation of the committee’s responsibilities and powers. This was consistent with the inquiry staff’s contention that the inquiry ought to proceed on an impeccably constitutional basis. As a staff memo to Rodino dated January 18, 1974 stated:

Jurisdiction over impeachment is nowhere expressly conferred. It is not enough to argue that the general power of the Judiciary Committee to proceed may ultimately be upheld.

In seeking the House’s authorization in a speech on the House floor, Rodino described the seriousness with which he took the responsibility of conducting an impeachment inquiry:

We cannot turn away, out of partisanship or convenience, from problems that are now our responsibility, our inescapable responsibility to consider. It would be a violation of our own public trust if we, as the people’s representatives, chose not to inquire, not to consult, not even to deliberate, and then to pretend that we had not by default made choices.

Before an unusually attentive House, Rodino concluded his remarks in a Churchillian manner:

Whatever the result, whatever we learn or conclude, let us now proceed with such care and decency and thoroughness and honor, that the vast majority of the American people and their children after them will say: “That was the right course. There was no other way.”

The vote in support of the resolution authorizing an impeachment inquiry was an overwhelming 410-6.

3. The committee allowed the president’s counsel to have a role in the proceeding.

This was a tough call for the committee. Democrats were at first reluctant to let James St. Clair, the president’s counsel, have any role. But after being challenged on the issue by Republicans demanding “fairness,” Rodino conceded, affording the president the opportunity to have his counsel present and to receive all of the documents and materials presented to the committee. The committee also gave the president’s lawyer the opportunity to state his views of the case at the end of the presentation of all the evidence. The president’s counsel was also permitted to “suggest” and cross-examine witnesses. Republicans on the committee hailed these decisions as examples of the Democrats “bending over backwards” to be fair.

4. The committee received much of the evidence in closed door, executive sessions and for the most part avoided leaking and grandstanding.

The executive sessions, at which members were presented with dry, piece-by-piece recitations of the facts of the case, were exhausting all-day meetings which went on for six weeks.

Most members decided to devote their entire time to the impeachment question. They were presented with raw material without summaries describing what the material meant. One member said to the staff during a session, “I have a problem remembering everything from when we first started these hearings. . . . I know you have to be nonpartisan. I think you have done such a good job that many of us have forgotten some of the allegations.”

During the evidentiary hearings, the members were forced to study the facts and develop their own theories of the case. To members of Congress used to the assistance of solicitous aides, the work demanded by the inquiry staff’s presentation — the reading, the listening and the thinking — was not something they were accustomed to. Perhaps saying more than he intended, Congressman Don Edwards, a Democrat from California, described the evidentiary hearings this way: “What they did was something absolutely new to us and we would not have done it that way. We’re not used to doing things in such depth, as carefully, as detailed as these books.”

5. Most important lesson of all: Chairman Rodino focused on addressing the concerns of the president’s supporters. He knew a strictly partisan impeachment would be a failure.

At the conclusion of the inquiry, during nationally televised debates, Rodino’s strategy was proven correct as Nixon loyalists, including conservative Republicans and southern Democrats, spoke eloquently about the abuses of the president.

Rep. Harold Froelich, a Republican from Wisconsin, wondered whether any administration could withstand the scrutiny that President Nixon’s had undergone. He added emphatically: “I am a Republican.” But then he spoke of the actions of President Nixon which bothered him:

I am concerned about obstruction of justice — a cover up plan that began on June 17, 1972 or soon thereafter and continued to involve the participation and knowledge of the president, a plan whose purpose was to save the administration from embarrassment, from losing votes in the November 1972 election, and ended up trying to save the long time loyal aides from being charged with violations of the criminal law.

Caldwell Butler, a Republican from Virginia, began his opening remarks like Froehlich, speaking of loyalty to the president and of “joint efforts with him.” “But,” he said, “Watergate is our shame.” A man of owlish looks and sharp wit, who represented one of the most conservative districts in the country, Butler said:

The people of the United States are entitled to assume that their president is telling the truth. The pattern of misrepresentation and half-truths that emerge from our investigation reveals a presidential policy cynically based on the premise that truth itself was negotiable.