These Are the Most Powerful .40 Caliber Pistols On the Planet 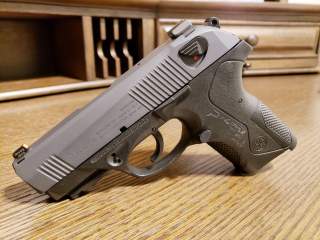 Key point: There are a wide variety of good .40 pistols to choose from.

Times are always changing, and that certainly applies to the gun world. A current trend that we are seeing now is a resurgence of the 9mm at the expense of the .40 S&W.

For instance, the Federal Bureau of Investigation (FBI) recently switched from the .40 S&W to the 9mm Luger, specifically switching from the Glock 22 and 23 to the Glock 17 and 19. The United States military very strongly considered switching to .40, but ultimately stuck with the 9mm when they selected the SIG Sauer M17 as their new service weapon. And police departments all across the country are trading in their .40 caliber pistols for 9mm.

It’s not difficult to see why. Even though 9mm FMJ is a fairly weak manstopping round, today there are a great abundance of highly effective self-defense jacketed hollow point loads at the disposal of civilians and law enforcement alike.  As a result, the need for .40 has diminished greatly, and on top of that, 9mm pistols carry more bullets and have lighter recoil.

You see, the whole reason .40 was developed was to give law enforcement a more powerful pistol than 9mm. Yes, the .45 ACP was out, but .45 pistols were also very limited by capacity.  This was why the 10mm was developed, but when the recoil created from the round was a little too excessive for some, it was shortened into the .40 S&W we have today.

The .40 S&W has served well for many years and will continue to do so for many more to come, but like was just discussed, the transition to a round that’s stopping power potential has been increased significantly and in a lighter and more controllable package is why we’ve seen .40 pistols begin to be replaced by 9mm.

But at the same time, this transition away from the .40 means that today there are an abundance of surplus .40 caliber pistols on the market, many of which are available for below average prices. And just because the .40 caliber itself is not as popular as it once was does not at all mean that it’s not a viable choice for defense.

In fact, the .40 is the third most popular caliber today, after the 9mm and .45 ACP, and is still very easy to find.  For these reasons, a .40 caliber pistol remains a more than viable option for self-defense or home defense, and again, the abundance of surplus guns and police trade-ins means that you have a lot of options at budget price points.

What makes the Beretta Px4 Storm an impressive option for a .40 is its capacity: 14+1 rounds in the full size version and 12+1 in the Compact model, which is the same kind of capacity that you would expect out of a 9mm pistol.

The Px4 also deserves a place on this list because of the fact that the rotating barrel design helps to decrease the extra recoil produced from the heavier .40 caliber round. The gun is also safe to carry thanks to its double action trigger pull and its manual slide safety, that also acts as a decocking lever just like the Beretta 92 series.

The Px4 also comes with an ML-STD 1913 Picatinny Rail and back straps on the gun for different hand sizes.

Do you want to know a .40 pistol that holds even more bullets than the Beretta Px4 Storm Compact? It’s the most popular law enforcement pistol ever made: the Glock 22, which can boast of a 15+1 round capacity.

The Glock 22 has ridden in the holsters of more current United States law enforcement officers than any other pistol currently out there, which is certainly a big claim to fame.  The Gen 5 version was recently released, which has a number of improved features such as different ergonomics and a flared mag well to make reloads much easier.

Essentially, the Glock 22 is identical to the Glock 17 in terms of dimensions, only it’s chambered for the .40 instead of the 9mm. A smaller variant of the Glock 22 in .40 is called the Glock 23, which holds 13+1 rounds of ammunition and is equivalent in size to a Glock 19.

The Heckler & Koch USP is a pistol that was designed completely around the .40 caliber. This is in direct contrast to many other pistols on the market chambered in .40 that are built on a 9mm platform.

Since the .40 caliber is a high pressure round, this means that 9mm frames chambered in .40 will typically have a shorter service life than the 9mm. But because the HK USP was built around the .40 caliber, it will be able to endure several thousand more rounds before needing to have parts replaced.

Beyond that, the HK USP is a full size duty pistol that holds 13+1 rounds of .40 in the magazine. The Compact variant, which is around the same size as a Glock 19 and is much easier to conceal, holds 12+1 rounds.

The USP is a double action single action pistol with a frame mounted safety and decocking lever. The safety can be engaged without decoking the handgun, so the pistol can be carried cocked and locked much like a 1911, and make your first shot a nice and crisp single action only pull.

Right now there are a lot of surplus and law enforcement trade-in SIG Sauer P226 and P229 pistols in .40 S&W floating around the market for only the $300 to $400, which represents a truly incredible value.  These pistols may be well worn on the outside, but on the inside they have been fired very little and are still in truly excellent condition.

Regardless of whether you were to go with a surplus SIG or a new one, you’re definitely getting a quality pistol regardless. Both the P226 and the P229 hold 12+1 rounds with a factory magazine, while aftermarket quality Mec-Gar magazines will extend this capacity to 13 or 14 rounds.

The P226 and P229 are double action single action pistols that lack manual safeties. But there are also versions of them, popular with law enforcement, that had a lighter double action only pull. These are called DAK pistols, and they are among the most popular of surplus options available for a budget price point.

Like the HK USP, the Smith & Wesson M&P is also built on a .40 caliber frame, which should give it a longer service life than other .40 pistols.

The full size M&P pistol holds 15+1 rounds when chambered in .40, giving equivalent firepower to the Glock 22. The Compact 2.0 model holds 13+1 rounds, and is slightly smaller for concealed carry purposes.

The M&P has proven itself to be a very reliable striker fired pistol, and it also found its way into the holsters of law enforcement officers across the United States as well.  The 2.0 M&Ps also have very aggressive stippling on the grip, which is becoming a big trend with pistols in today’s world.

Walther pistols such as the P99 and PPQ are known for being among the most ergonomic pistols on the market today.  The P99 itself is a very unique offering. Despite being a striker fired gun, it is a double action/single action pistol with a decocking lever.

The PPQ is a more traditional striker fired auto in that it has a very light and crisp single action only trigger, which is also very widely regarded as being one of the best triggers of any pistol that money can buy today.

The P99 and PPQ also hold either 11+1 or 12+1 rounds of .40, depending on the magazine that you get.  Something that should be noted is that they can be rather snappy when chambered for the .40 round, so you’ll need to be prepared for that and get plenty of training in so you can properly manage the recoil.

Any one of these .40 caliber pistols would be a good choice for home defense, concealed carry, self-defense, or just casual range use.