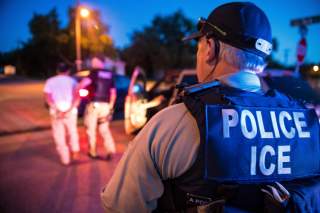 Hundreds of county jails in the U.S. are paid by Immigration and Customs Enforcement (ICE) to detain immigrants facing removal proceedings.

On a typical day in 2017, for instance, Theo Lacy Facility in Orange, California, operated by the Orange County Sheriff’s Department, held about 500 individuals for ICE and received US$118 per person per day, bringing in a total of $59,000 a day.

More so than federally operated facilities, county jails, along with facilities operated by for-profit companies, have come to hold for ICE the lion’s share of immigrant detainees facing removal proceedings.

So why are these immigrants being held in county jails, the place where usually only those charged with criminal law violations are held by local, not federal, officials?

In our study published on January 29, we set out to investigate this widespread use of local penal institutions for civil confinement purposes. As scholars who study immigration, we wanted to understand which counties jail immigrant detainees and what those counties have in common.

These agreements with ICE have come under increasing scrutiny and criticism by government watchdogs, media and activists, for allowing ICE to avoid the public bidding process and to operate without standard operating procedures required of other federal awards.

According to the U.S. Office of Inspector General, avoidance of the public bidding process has meant that “ICE may have overpaid for detention services,” and “ICE has no assurance that it executed detention center contracts in the best interest of the Federal Government, taxpayers or detainees.”

To better understand these agreements, we analyzed the In Our Backyards data from Vera Institute of Justice, a nonprofit focused on reforming the U.S. criminal justice system. This data set contains county-level information on prison and jail populations over time across the United States. We also compiled various measurements that capture local conditions.

Our period of observation starts in 1983 – the year that the Bureau of Justice Statistics started tracking this issue – and ends in 2013, the most recent year for which census data on all county jails is available.

We found that the number of counties holding immigrant detainees grew over time, steadily rising from 128 counties in 1983 to 727 counties in 2013. That’s a nearly sixfold increase.

This rise in county involvement was most heavily concentrated in the southern U.S. By 2013, over half of all participating counties were located in the South.

The largest growth was also concentrated in small to midsized counties outside of urban metropolitan areas. By 2013, four of every 10 counties holding immigrants for ICE were rural.

We also found that the growth of counties holding immigrant detainees was overwhelmingly concentrated in Republican Party strongholds. This result is not due to the Republican Party dominating southern counties. Our regression analysis – a statistical method that examines the relationship between multiple variables – shows that counties that were switching from voting for Democrat to Republican presidents became more likely to contract with ICE.

Counties were also more likely to participate in immigrant detention if they experienced worsening local labor market conditions, combined with increases in empty jail beds. It’s likely that both of these conditions heighten counties’ perception of economic benefits to entering into contracts with ICE.

Finally, we found that, up to a certain point, counties with a growing local Latino population were more likely to participate in immigration detention.

Our study raises important questions for the anti-detention movement – a social movement seeking to end immigration detention in the United States.

Take Theo Lacy, for example. In March 2019, Theo Lacy announced that it will end its contract with ICE in 2020. This decision was due in part to a successful immigrant rights campaign to end detention in Orange County.

But local decisions to cease county jail contracts with ICE may result in ICE increasingly transferring detainees to local jurisdictions that are more remote or hostile to immigrant rights. Research shows that such transfers can be extremely detrimental to detainees’ ability to access information and resources that enable them to enforce their legal rights.

For example, detainees who are transferred to remote parts of the country are often separated from family, friends and community volunteers who can provide emotional support, help them in gathering evidence and preparing them for their court hearings. Accessing interpreters and lawyers is much harder in remote areas of the country.

In addition, transfers can mean changes in the controlling law that governs the detainees’ immigration case, because the case will be governed by the law of the federal circuit in the jurisdiction in which the immigrant is detained.

In 2016, the Homeland Security Advisory Council recommended that ICE rely only minimally on county jails, because officials operating facilities that were serving both criminal inmate and immigrant detainee populations showed resistance to accepting the full range of civil detention standards applicable to immigrant detainees.

Holding immigrant detainees in jails may also strengthen the public’s unfounded assumptions about the criminality of immigrants, given that the public often assumes that jails are only for criminal defendants awaiting their trials or for those serving their criminal sentence. Immigrant detainees themselves fear such stigmatization.

In recent years, public pressure and political will to reduce the criminally incarcerated population in the United States have gained strength. Yet our findings suggest that criminal justice reforms that reduce the number of individuals in jails and prisons may generate new opportunities for struggling counties to fill their empty jail beds with a new supply of immigrant detainees.