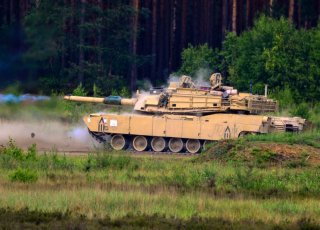 For instance, in the not-too-distant future, Army commanders expect the Abrams tank to operate air and ground drones under enemy fire, sending large robotic vehicles to clear tank ditches and breach obstacles. Further, these unmanned systems will use long-range, high-fidelity sensors to maneuver and target enemies in dispersed formations.

Should there be a major force-on-force engagement with a technically-advanced rival, the Abrams appears to be the only major platform capable of delivering the kind of massive, fire-power that any kind of combined-arms assault or counterattack might require. Yet, the Abrams’ combat utility is rapidly expanding in real-time due to upgrades and technologies that are changing Army commanders’ tactical thinking. This is already being seen in the now arriving M1A2 SEPv3 Abrams’ variant, which is a much more capable and noticeably different tank than its predecessors. The SEPv3 has improved armor protection; a new generation of computing and command and control systems; and modernized thermal and infrared targeting sensors that enable longer range, more widely scoped target identification.

The SEPv3 also operates with a new level of GPS connectivity, moving map displays, threat-based intelligence data, and an upgraded engine and transmission. On-board computing and electronics are also intended to add the technical infrastructure for future platform upgrades that are now emerging in the forthcoming v4 variant. This will bring third-generation infrared sensors; a new generation of ammunition data links; and an entirely new varied, adjustable, and much more capable Multi-Purpose Round ammunition. This final capability will allow the Abrams v4 to fire high-explosive anti-tank rounds, multi-purpose rounds, and canister rounds intended to blanket a wide area with fragments for anti-personnel operations.

The Abrams tank is also being enabled to take on a much wider mission scope, in part to accommodate the kinds of changing threat environments it would likely face in anticipated future engagements. What this means, among many things, is that the Abrams v3 and v4 are being engineered to perform both traditional tank combat operations as well as an entirely new scope of warfare tactics. These tactical dynamics explain why the Army continues to refine new concepts of traditional combined arms maneuvers tailored to a new generation of threats.

Some of these new dimensions pertain to the ongoing strategic and tactical expansion of unmanned systems, multi-domain air-ground connectivity, and much better networked, and therefore dispersed, warfare maneuver formations. These tactics are driving the Abram’s weapons developers and the Army’s war planners to continue to architect and integrate a new generation of technical capabilities. Newer v3 and v4 tanks will be able to operate, and possibly even dispatch, air and ground drones to carry ammunition, test enemy defenses, counter enemy obstacles and countermeasures, and surveil forward, high-risk areas under enemy fire.