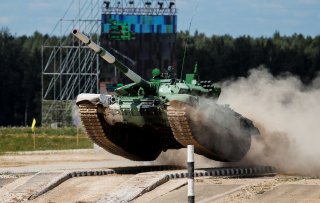 Oftentimes, a measure of a tank’s success as a design isn’t whether it has the most powerful gun or thickest armor, but how adaptable it is. Being able to effectively accommodate new guns, armor, turrets, and sensors can keep a tank on the frontline for decades past its initial fielding, saving costs for militaries and often growing domestic industry. Here are some of the most adaptable tanks in the world.

The most-produced tank in military history would not have its title if it was not so adaptable. Constant upgrades and improvements kept the T-55 relevant through nearly all of its four-decade production run, and the T-55 holds many “firsts” in tank development. T-55s were the first tanks fitted with hard-kill active protection systems, and among the first to be fitted with a true two-axis stabilizer. They later would be upgraded with distinctive BDD turret armor, gun-launched laser-guided anti-tank missiles, and laser-warning receives of multiple makes. There even exists a 125mm upgrade kit for the T-55. The chassis also proved amenable to turret replacements, with Finland utilizing the Marksman anti-aircraft turret on their T-55 chassis.

The T-72 emerged from a fierce rivalry with its Cold War brethren as the primary service tank of Russia. Soviet production also ensured that it was the most common export tank of the late Cold War. These combined have made the T-72 one of the most modified tanks in the world, with almost every defense concern producing parts and upgrade kits for it. But the design itself has merits in itself, the large turret ring and dependable chassis itself has proven adaptable into odd roles such as the heavy flamethrower TOS-1 and the BMPT infantry support vehicle.

The variation of M4 Shermans produced during WWII is staggering. From different suspension systems to different engines (including one that consisted of five engines combined) to even different hull shapes, the M4 design proved supremely adaptable. It was even able to mount the powerful 17-pdr Anti-Tank gun with some ingenuity, as well as a 105mm howitzer gun. The design was also adapted into an armored personnel carrier. Even postwar, the M4 Sherman proved adaptable, with Israel and many South American countries upgunning it with modern cannons.

The British Centurion was one of the most widely exported Western tanks during the Cold War, which, as with the T-55, led to a myriad of variants being created. The British converted it into an engineering vehicle, mounting a massive spigot mortar. The Swedes applied explosive reactive armor. The Israelis even removed the turret to create their first “heavy APCs” in the Nagmachon. While retired by most countries, the Centurion serves on today as the Olifant in the South African National Defense Force, which features a drastic reprofiling of the turret for adaptation to African conditions.

While it was the workhorse of the United States during most of the Cold War, the M60 remained relatively unchanged in basic profile throughout. However, as a new generation of tanks came online and the M60s were replaced in U.S. service by the M1 Abrams, a cottage industry to modernize and upgrade export M60s materialized. Nowadays, M60s in service are fitted with active-protection systems, massive turret armor packages, and the latest sensors and sights.