These Strange Russia Compact Rifles Must Be Seen To Be Believed 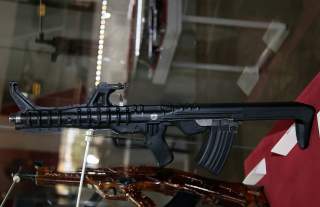 The 1960s and 1970s were an interesting time in experimental Soviet rifle design. Several radical bullpups came out of Russia, and pushed the limits of gunsmithing, incorporating features like triple barrels, plastic resin housing, and blisteringly high rates of fire.

A hallmark of bullpups is their compact, high barrel-to-length ratio, which makes them ideal for urban operations, or for troops in vehicles, where space is at a premium. Magazines are generally inserted behind the grip and trigger group. Unfortunately, bullpups are plagued by a number of shortcomings.

Despite the envelope-pushing designs, none of these designs became standard-issue.

The KTB-022 and TKB-011 family of prototype bullpup rifles look like something out of an alien/predator movie.

The variants in this family of prototypes had long AK-style banana clips in the stock of the rifle, a compact design, large sights, external red-orange resin housing, and a forward, aggressive look. One notable feature in the prototype family had an integrated magazine well and grip, which saves space, but would presumably have been a problem for shooters with smaller hands.

Dr. Allan Orr, a counterterrorism and insurgency specialist described bullpups as “what an engineer comes up with when working in a vacuum, untethered to any considerations of the art of war.” A fixed butt length makes them less adjustable, a problem for shooters with longer or shorter than usual arms, or when wearing bulky body armor. Inserting a heavy magazine in the butt also shifts the center of gravity rewards, making them unwieldy, affecting situational awareness when reloading.

The extensive use of a hardened Bakelite-like resin for the rifle’s outer hardware, then a new and untested material, led to questions about reliability and robustness in extremely rugged environments, an especially important question in Russia, where winter temperatures can dip to -40 Celsius.

Both families of rifles actually had decent ergonomics due to their ejection port. Instead of being simply extracted and laterally ejected, spent casings traveled through a tunnel-like ejection tube, either next to or above the barrel, exiting forward and to the right. This allowed for ambidextrous firing, and didn’t require any modifications for left-handed shooters. This feature was picked up, albeit many years later, by Kel-Tec for their RFB.

Starting in the late 1940s, the standard Russian cartridge was the venerable 7.62x39mm, for which the AK-47 was designed in tandem. The AK-47 was a reliable, rugged, and powerful design. Its successor, the AK-74, designed in, yes you guessed it, 1974, improved upon the AK-47. The redesign had better ergonomics, extensive use of stamped, rather than milled steel components to simplify mass production, and a redesigned muzzle brake that better directed spent gasses to make fully automatic firing more controllable. The AK-74 also switched to a smaller round which is still standard-issue for the Russian armed forces, the 5.45x39mm.

Despite the attempt to improve accuracy, the AK-74, like its predecessor, still suffered from high muzzle rise during automatic bursts, contributing towards its reputation for low accuracy.

TKB-0146 was one weird rifle. Despite its odd outward appearance, what was stranger was its rate of fire. Its safety selector has three firing positions, single, automatic, and burst, plus safe. When on burst, the rifle would increase its rounds per minute from a moderate 600, to a blistering 2,000 rpm. For reference, the H&K MP5’s rpm is 700-900, depending on the variant, and the M4 carbine a similar 700-950 rounds per minute.

But how could a shooter keep rounds on target in burst mode? The solution was a delayed recoil action, in which recoil from the first round is internally delayed and a second-round is fired before recoil from the first shot is felt by the shooter. In this way, the recoil created by the two-round burst is felt by the shooter simultaneously, preventing excessive muzzle rise experienced during fully automatic firing, and putting more shots downrange on target.

The idea was to improve accuracy, but like the three-burst mode of early M16 variants, this concept fell out of favor due to excessive ammunition waste.

Three barrels, all black, and a bullpup— the TKB-59 was an experimental design that attempted to increase hit probability. The idea was that with multiple projectiles, a shotgun-like effect could be achieved, theoretically increasing the percentage of shots on target.

Like the TKB-0146, recoil from the three barrels would be simultaneous, keeping the shooter’s sights on-target. This was achieved by shooting three rounds at the same instant, allowing the projectiles to have an identical, side-by-side trajectory.

The TKB-59 had an extra-wide magazine with three internal compartments that each fed their respective barrel separately, essentially three magazines in one.

Despite their promise as compact, precise firearms, these rifles never became standard issue. Still, they are intriguing exploratory platforms that pushed the capabilities of Soviet gunsmiths and were clearly far ahead of their time. The remaining prototypes are kept in Russia, at the Tula State Arms Museum.

Caleb Larson holds a Master of Public Policy degree from the Willy Brandt School of Public Policy. He lives in Berlin and writes on U.S. and Russian foreign and defense policy, German politics and culture. This article first appeared last year.