These Versatile Navy Vessels Will Change the Scope of Military Missions 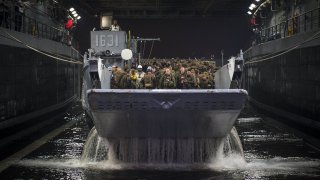 The Navy’s fleet of Expeditionary Fast Transport (EPF) vessels is continuing to take on a growing number of humanitarian and medical support missions, given the speed, versatility and cargo-carrying capacity of the ships.

However, alongside the expanding mission scope and growing combatant commander requests for the fleet, the ships bring some perhaps lesser recognized advantages to maritime warfare.

While perhaps operating with less firepower than many other deeper draft, heavily armed warships, EPFs enable combat operations and potential war operations in ways that might not otherwise be possible.

“Each vessel includes a flight deck to support day and night aircraft launch and recovery operations,” according to a press statement by Naval Sea Systems Command that was issued on Sept. 3, 2020.

This means that armed warships can patrol the area and quickly transport combat vehicles, equipment and troops to land sites along the coast. EPFs can support amphibious operations, a tactical circumstance that introduces new dimensions to deterrence should Russia or China be contemplating offensive actions.

The Navy has received twelve EPFs from Austal USA, a Gulf Coast shipbuilder that is already working on the thirteenth ship. All EPFs are operated by Military Sealift Command. Interestingly, the thirteenth ship will set a new precedent for future ships in its class by being able to launch, land and operate V-22 Ospreys. Its ability to conduct high-speed maneuvers coupled with heavy equipment transport technology creates combat-tactic advantages. Also, its range of twelve hundred miles can enable crucial transport without having to operate large, deep-draft or big-deck ships in high-risk areas.

Additionally, the speed of the vessels can help support the Navy’s Distributed Maritime Operations concept, which is a strategy aimed at leveraging long-range sensors, networking, and new weapons applications to optimize combat effectiveness. This strategy can be achieved by operating with less congested—and therefore potentially more vulnerable—aggregated forces on the ocean. For example, once a beachhead is secured through an amphibious attack, arriving forces will be in great need of reinforcements to expand and build upon mission objectives. These ships also help sea-basing objectives by enabling transport from the ocean, thereby removing the need for land deployments in high-risk, difficult-to-reach areas. Larger, deeper-draft ships will be able to operate at much safer distances, while EPFs approach enemy areas as smaller, faster and potentially less vulnerable targets.

The ability to operate at sea gives attacking forces better protection and increased airpower support. Big-deck amphibious ships or even aircraft carriers could be well-positioned to better support advancing attack forces moving on land. This is mainly possible if deck-launched air-attack platforms, such as F-35 fighter jets, V-22 Osprey tiltrotor aircraft or F/A-18 supersonic jets have targeting and logistics support from the shore.

Special operations forces also need to move quickly in smaller groups. Equally important, they may need supplies, weapons, equipment and possibly fast-moving tactical vehicles. Thus, there are mission objectives that small groups of special operations forces may not be able to accomplish with an eleven-meter Rigid Inflatable Boat which naturally cannot transport equipment. For example, a V-22 Osprey launched from an amphibious ship or offshore sea base may wish to conduct Mounted Vertical Maneuver operations wherein Marines drop in behind enemy lines to gather intelligence, support friendly troops or launch targeted, covert attacks. These types of missions would benefit from a fast transport vehicle like the EPF.