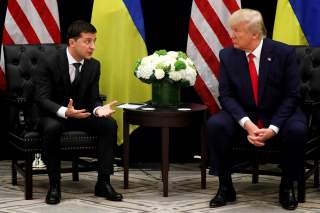 In a recent National Interest article, George Beebe dismisses US policy on Ukraine as “steeped in illusions” and argues for a “sensible alternative.” It is a nice try, but what he comes up with does not pass muster.

Beebe disagrees with longstanding US policy to give Ukraine the opportunity to choose its own future, which includes trying to join NATO and the European Union. So, he has decided to label this bipartisan support for Ukraine “groupthink.”

To be sure, “groupthink” is not a compliment. Groupthink led to policy disaster in Vietnam and Iraq, Beebe writes, and here he is right. He points out that numerous postmortems determined that analysts “‘simply disregarded evidence that did not support their hypotheses'” in the case of Iraq. Also a fair point. However, Beebe cannot make the same argument about Ukraine.

The bipartisan consensus in Washington on Ukraine is not unthinking nor has it willfully ignored evidence in order to make its case. The conventional wisdom has been absolutely right and corresponds with reality: NATO prevents war and preserves stability in Europe. The two great world wars of the last century began in Europe. There has not been a great power war in Europe since 1945, and NATO has been the continent’s great guarantor of peace.

Strong US support for Ukraine has been the natural outcome of the past seventy years of US policy in Europe. Moscow’s aggression in Crimea and the Donbas—following its war in Georgia—represents the first time a major power has been at war in Europe since 1945. Moscow’s wars have been in direct violation of its obligations under the Helsinki Final Act, the Paris Charter, and other agreements founded on respect for the sovereignty and territorial integrity of all European states. They are part of a broader policy designed to undermine the security order that emerged in Europe after the Cold War, which Moscow helped to shape under Gorbachev and Yeltsin, but which Russian President Vladimir Putin now believes is disadvantageous to his interests.

Simply put, it is a critical American interest that Moscow not succeed in the Donbas, or at least that it pays a major price for its aggression. The Kremlin’s decades-long policy of provocation against the Baltic states, now NATO allies, indicate that Moscow’s designs may not be limited to Ukraine. That understanding—and the desire to avoid a potentially catastrophic miscalculation by the Kremlin if it tried to replicate its Ukraine policy in another area—is at the heart of bipartisan support for Ukraine.

Beebe claims that there are three questionable assumptions at the heart of the Washington consensus on Ukraine. First, “Ukraine can be integrated into a NATO-dominated trans-Atlantic community and still remain intact and at peace with itself.” He frames this assumption as if Moscow’s aggression in Ukraine was prompted by the specter of NATO membership. Wrong. NATO has done little since 2008 to advance Ukraine’s potential future membership, and the Yanukovych government in 2010 had taken NATO membership off the table in favor of non-alignment. The immediate cause of the Ukraine-Russia crisis that prompted Kremlin aggression was Moscow’s insistence that Ukraine not sign an Association Agreement with the EU, which is far removed from bona fide membership.

Speaking of groupthink, Beebe echoes the embarrassing National Intelligence Estimate on Ukraine from the mid-90s when he claims that NATO membership would split the country. In reality, Putin’s aggressive policies in Ukraine have made him the source of a new unifying Ukrainian patriotism. More than 50 percent of Ukrainians now favor NATO membership. Perhaps that is because, as Ukraine’s foremost strategic thinker Volodymyr Horbulin has said, Ukraine will never experience peace until it joins NATO because only that would limit Moscow’s interference in the country.

For Beebe the second questionable assumption is that “US military support for Ukraine deters Russian aggression.” To make his point, he claims that this was the US approach in Georgia in the 2000s, and the approach failed. In his telling, the United States insisted that Georgia would ultimately join NATO and provide weapons and believed that this would prevent war. Not quite. While the United States did what Beebe said, Bush’s Assistant Secretary of State for Europe Daniel Fried has said that the administration was deeply concerned starting in about 2007 that Moscow was trying to provoke a war with Tbilisi and did not regard the relatively modest US military relationship with Georgia as sufficient to prevent it. Vice President Dick Cheney, Condoleezza Rice, Fried, and others urged Georgian President Mikheil Saakashvili to ignore Putin’s provocations. For years the Kremlin had challenged Georgia with military overflights, occasionally sending missiles into Georgia, and permitting occasional firing from the occupied parts of Georgia.

What’s more, there was zero prospect of Georgia joining NATO in 2008; the Bush team failed at the Bucharest NATO summit to get Georgia a Membership Action Plan, although it secured a pledge that Georgia and Ukraine “will be members” one day, reinforcing Putin’s determination to block Georgia’s Euro-Atlantic path. The division inside NATO may have given Putin the impression that he could proceed with impunity. The Kremlin provoked a war with Georgia because Putin wanted to give Saakashvili a black eye, and he believed that Russia would pay no price for its action.

Sadly, Putin was right. The US-Russia “reset” followed a year later. The real lesson of Georgia is that a Western policy of accommodating Kremlin imperial ambitions in its Near Abroad only encourages more of the same. Russia suffered no economic sanctions and French President Nicholas Sarkozy negotiated a ceasefire that Moscow repeatedly violates.

Beebe claims that it is an error “to assume Putin regards war in Ukraine as a discretionary ambition rather than as an imperative linked to the survival of Russia itself.” He also cites the authority of Henry Kissinger, who claims that “to Russia, Ukraine can never be just a foreign country.” To accept that assertion is to deny agency to the Ukrainian people and their right to choose their own future, and to accept Putin’s frequent argument that Ukrainians do not really exist as a people and that Ukraine should not exist.

Moreover, the war in Ukraine is Putin’s war, not Russia’s. A democratic and westward leaning Ukraine is no danger to Russian security; it may however pose a problem for Putin’s authoritarian and corrupt system of government that claims a Western open society is not the Slavic or Eastern Orthodox way.

Numerous polls by the Levada Center indicate that a solid majority of Russian citizens do not want their soldiers fighting in Ukraine. This makes Russian casualties a great vulnerability for Putin. This explains why US military assistance to Ukraine helps deter Moscow. The Kremlin’s military advances in the Donbas from 2014 through 2016 used tanks to great advantage. President Donald Trump’s 2017 decision to provide Javelin missiles has proved a deterrent to Moscow’s use of tanks. And contrary to President Obama and other “realists” who argued against sending Javelins, Moscow did not respond to this step with escalation.

The US consensus on Russia and Ukraine has not been limited to sending Javelins to Kyiv. It also included sanctions on Moscow for its aggression in Ukraine. And those sanctions have been successful by targeting regime figures close to Putin and costing the Russian economy 1-1.25 percent of GDP growth a year. This is a serious price to pay, which is why the Kremlin has been working assiduously to undermine the sanctions.

Some critics say that sanctions have failed because they have not forced the Kremlin to change its behavior. Wrong again. Russia likely would have pursued even more aggressive steps against Ukraine were it not for fear of even stronger sanctions. The purpose of sanctions is to exact a price that over time will encourage Moscow to get out of Ukraine—in the meantime, they weaken the economy of a government pursuing revisionist aims in Europe and beyond. And they are working: most economists now describe Russian economic growth as stagnant or anemic.

For Beebe, the third mistaken assumption of Washington groupthink is that “US security can and must be based on a transformational agenda abroad.” He is partly right. Foreign policy thinking in both political parties since the end of the Cold War has been dominated by those who believe in advancing democracy overseas, and this policy instinct certainly led us into disaster in the Middle East after September 11.

The problem, of course, is that Beebe applies this same line of reasoning to Ukraine and Europe. It doesn’t fit. Actual realists pay close attention to individual circumstances and recognize the perils of making analogies across time and space. US policies in the greater Middle East were bound to fail because the societies with whom we were interacting were not culturally ready to establish the kinds of institutions needed for Western-style governance.

The situation in Ukraine is much different. Ukraine’s strong civil society, already a potent force in the late Soviet period, was an early harbinger of the country’s readiness for democracy. So was the fact that the country’s first president, Leonid Kravchuk, oversaw an honest presidential election in 1994 that his opponent won; indeed, Ukraine has seen two other presidents lose their reelection bids, a democratic record unmatched in the post-Soviet space. The correct historical comparisons for Ukraine’s political development do not come from the Middle East, but from Eastern Europe. And one of the great periods of US and Western policymaking was the 1990s, when NATO and the EU embraced the newly liberated countries, and assisted in their transformation into democratic, market economies.