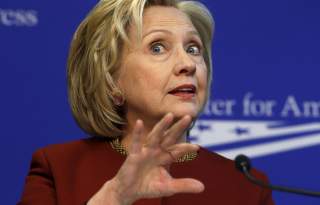 ThinkProgress’ decline has confounded some media observers, given the rise of other liberal news outlets during the Trump era. The site hired dozens of new staff members in recent years, but revenue has fallen far short of expectations, according to The Beast.

ThinkProgress, a top progressive website operated by the liberal think tank, Center for American Progress, is shutting down on Friday after a 15-year run.

The decision was made after the site was unable to find a buyer. The Center for American Progress (CAP) has tried to sell off the website after operating for years in the red, according to The Daily Beast.

“Given that we could find no new publisher, we have no other real option but to fold the ThinkProgress website back into CAP’s broader online presence with a focus on analysis of policy, politics, and news events through the lens of existing CAP and CAP Action staff experts,” Navin Nayak, the executive director of the Center for American Progress Action Fund, wrote in a message to staff, according to The Beast.

“Conversations on how to do so are just beginning, but we will seek to reinvent it as a different platform for progressive change.”

About a dozen ThinkProgress employees will lose their jobs. They are being provided severance packages through November, and will be covered under the non-profit’s health plan through the end of the year.

ThinkProgress’ decline has confounded some media observers, given the rise of other liberal news outlets during the Trump era. The site hired dozens of new staff members in recent years, but revenue has fallen far short of expectations, according to The Beast.

The site has also faced criticism that it has tailored its reporting to demands from the Center for American Progress, which receives funding from wealthy liberal donors and some foreign governments.

Podesta emails released by WikiLeaks during the 2016 campaign showed that Judd Legum, the founder of ThinkProgress, provided the Clinton campaign with strategies on how to go after Vermont Sen. Bernie Sanders.

ThinkProgress has also targeted Sanders during the 2020 election cycle. In April, the website published a video that criticized the democratic socialist over his personal wealth.

After Sanders complained to CAP, Tanden threw ThinkProgress under the bus, saying that the video was “overly harsh and does not reflect our approach to a constructive debate of the issues.”

Legum, who left ThinkProgress over a year ago, said CAP’s decision is “disheartening.”

2. I joined CAP in 2003 and was one of the first employees and I joined because I believed in the mission of creating permanent progressive infrastructure

4. The decision to fold ThinkProgress back into CAP, in my view, is a mistake. It violates the spirit in which it has operated over the last 15 years.

It also underscores that this was ultimately about control, not money.