Thomas Modly Has Failed the Navy He’s Supposed to Lead 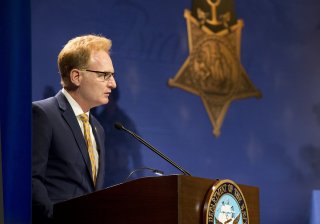 During a surprise visit to Guam, where Roosevelt is moored while the vessel’s crew struggles to contain an outbreak of the deadly novel-coronavirus, Modly described Capt. Brett Crozier as “naive” and “stupid.”

Modly relieved Crozier of his command on April 2, 2020, after Crozier wrote an internal memo begging the Navy to let him send ashore most of his 4,000 sailors in order to slow the spread of the coronavirus. The letter quickly leaked to the press.

As Crozier left the carrier, hundreds of his sailors cheered him and chanted his name, a dramatic display of gratitude that several sailors captured on video. In visiting Guam just days later and attacking Crozier, Modly deeply offended many of the sailors whose lives Crozier sacrificed his career to save.

Crozier since has tested positive for the virus and is in quarantine.

“I understand you love the guy,” Modly, a former Navy helicopter pilot and corporate executive, told the Roosevelt sailors. “It's good that you love him. But you're not required to love him.”

Modly said, without offering any proof, that Crozier wanted the memo to leak. The acting secretary also accused journalists of wanting to embarrass the Navy.

In an audio recording of Modly’s speech that quickly leaked to the press, sailors can be heard cursing Modly and expressing their shock at the civilian secretary’s attacks on Crozier.

The Guam speech was the latest in a series of profound missteps by Modly, who has been acting secretary since November 2019, when Trump fired previous Navy Secretary Richard Spencer.

Spencer had resisted Trump’s pardoning of a Navy SEAL who was accused of murdering an Islamic State captive and shooting civilians, and who was found guilty of mistreating the corpse of an enemy combatant.

The Trump administration viewed Modly as an administrator who would not oppose Trump’s pardons and policies, including the president’s diversion of billions of dollars in military funds to the administration’s wall on the southern border.

But Modly quickly proved to be a controversial department head even before he alienated the crew of an aircraft carrier.

In particular, Modly has seemed out of touch as the Navy struggles to afford the scores of new ships it needs in the coming years in order to grow the fleet from today’s 295 vessels to as many as 355.

Navy admirals have all but admitted that, with annual shipbuilding appropriations recently averaging around $20 billion, the fleet can’t afford to grow to 355 front-line ships.

But Modly blithely insisted it should try growing to 435 ships, instead. That bigger fleet would include a staggering 390 manned vessels plus 45 large robotic ships.

Modly has not explained how the Navy would pay for the ships.

Obsequious to an abusive commander-in-chief, apparently ignorant of the basic economics of shipbuilding and unsympathetic to deployed sailors, Modly in just a few months’ time has proved to be among the worst Navy secretaries in memory.

Modly’s attack on Crozier is just the latest evidence of his failure.