Thompson Center Encore Pro Hunter: The Most Versatile (And Best) Rifle On The Market? 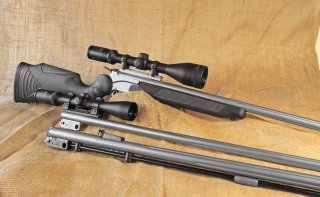 The Thompson Center Encore Pro Rifle is a single-shot, break-action firearm. It’s also a switch-barrel rifle, meaning the barrel is interchangeable. Any Encore barrel will fit, which lets you customize the gun to fit any need. Whether you’re looking for a gun suitable for hunting, target shooting or self-defense, the Encore Pro is great for all types of shooters. Here’s why.

The precision rifling of the TC Encore Pro gives you accuracy you can count on. The 28” barrel gives you the best velocities you can expect from a given rifle cartridge. Like most rifles, the accuracy definitely varies based on what kind of ammo you use. I’ve noticed that I get the best, most consistent accuracy when I use powder instead of pellets. When I used between 185-200 grains, my 3 five-shot groups averaged 1.72 inches, and when I used 140 grains, it was around 1.2 inches. With most loads, you can expect excellent accuracy. The more often you clean the gun—and riflescope—the better shot groups you get. The trigger makes it a little harder to get even smaller groups, because it has a longer lock time. But, this tends to come with the territory with a hammer-fired gun.

Thompson Center rifles are known to be great quality, and TC is a reputable company. The Encore is one of the best break-actions on the market, with no misfires to report, and extreme durability and robustness. However, there’s one downside: loading the gun with a dirty barrel. I had a couple bullets get stuck and had to clean the gun in order to get them out. For the most part, however, it’s a reliable gun you can count on no matter what you’re using it for. You can maintain optimum control in any conditions, wet or dry, with the overmolded pistol grip. It’s definitely a stand-out in comparison to similar models.

This is a well-built, well machined gun. The fit, the feel, and the balance are all fantastic, and the pistol grip stock fits perfectly in your hand. It’s one of the most comfortable grips I’ve ever experienced! One of the coolest features of the Encore Pro is the interchangeable barrels. It’s pretty simple to change them out:

Just remove two screws from the forearm, pull out the hinge pin, switch the barrels, replace the pin and screws, and... done! It’s quick and easy to transform it from a muzzleloader, to a slug gun, to a centerfire rifle.

It also comes standard with an ambidextrous Swing Hammer. A couple of downsides:

Cleaning the rifle is a bit challenging because in order to remove the breech, you need to first remove the fixed extractor. This involves removing two screws on the forearm, one on the extractor, and then reassembling the rifle after cleaning it. However, this is easier with an E-Z tip primer extractor. When you have one of these, it’s easier to clean, and you’re more willing to clean it often, which improves accuracy. There’s also no safety on the gun. But you can still move safely, even with a round in the chamber, by keeping the hammer forward.

The Encore’s trigger is pretty good. It’s firm but crisp, which helps to offset the heavier pull—around 5 to 6 lbs. There’s a little inconsistency with the trigger pull, but other than that, it’s pretty impressive! No take-up, no sand, no creep, and no grit to speak of. The travel before the hammer snaps is minimal.

The TC Encore Pro is a break-action, single-shot rifle, and one of the best break-action muzzleloaders on the market. It features a Quick Load Accurizer with reduced rifling at the tip, which allows for easy loading. To open the action, you just pull back on the trigger guard lever and load your shell! One downside is that it comes with an extractor rather than an ejector, so you have to manually remove the cartridges or cases.

The standard barrel of the Encore is advertised at 28,” but since the barrel is interchangeable, this all depends on what you choose. Overall, it measures around 42.” It’s relatively lightweight, and depending on the accessories you use, weighs anywhere from 7.5 to 8.25 lbs.

Recoil management is definitely something TC got right with the Encore. It comes with a FlexTech recoil reducing stock, which boasts four layers of Limbsaver navcom material. The stock also comes with pliable inserts in the butt and comb, which makes the gun shoot softer. The buttpad is soft enough to absorb most of the recoil from firing. This firearm is great because it can handle tough-recoiling loads without making the shooter absorb all the recoil.

The MSRP for the Encore Pro is around $790. For an extremely customizable, smooth shooting rifle, it’s not a bad price! It’s tried and true, and the customizability it offers at this price point is steller. It’s within most people’s budget, and perfect for families that need one gun for any situation, or for the “one-gun-man.”

The TC Encore Pro is a great hunting rifle, and is perfect for anyone looking for an inexpensive gun for hunting, target shooting, and self-defense all rolled into one. Here are some of the best features:

So if you’re looking for the best in versatile hunting guns, look no further than the Thompson Center Encore Pro.